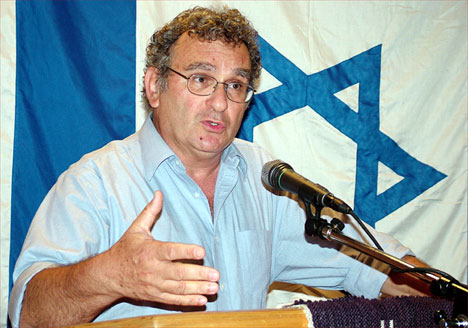 Over at the Islamophobic blog Harry’s Place Michael Ezra can scarcely contain his excitement at the news that Israeli historian Benny Morris will be speaking at the London School of Economics tomorrow at the invitation of the LSE Middle East Centre. The organisers state: “The lecture will look at various aspects, some of them innovative, of the 1948 War, the first between the Arabs and Israel.”

Benny Morris is the man who, in a notorious interview with Haaretz in 2004 entitled “Survival of the fittest”, supported the ethnic cleansing of Palestinian Arabs in 1948 and only regretted that the Zionist leadership had not gone further.

Asked if he was really arguing that Ben-Gurion had expelled too few Arabs, Morris replied:

“If he was already engaged in expulsion, maybe he should have done a complete job. I know that this stuns the Arabs and the liberals and the politically correct types. But my feeling is that this place would be quieter and know less suffering if the matter had been resolved once and for all. If Ben-Gurion had carried out a large expulsion and cleansed the whole country – the whole Land of Israel, as far as the Jordan River. It may yet turn out that this was his fatal mistake. If he had carried out a full expulsion – rather than a partial one – he would have stabilized the State of Israel for generations.”

His stunned interviewer responded: “I find it hard to believe what I am hearing.”

Morris continued: “The Israeli Arabs are a time bomb. Their slide into complete Palestinization has made them an emissary of the enemy that is among us. They are a potential fifth column. In both demographic and security terms they are liable to undermine the state. So that if Israel again finds itself in a situation of existential threat, as in 1948, it may be forced to act as it did then.”

Morris went to say that “Palestinian, Arab and Muslim hostility toward Jewish existence here is taking us to the brink of destruction” and attributed this to “Islam and Arab culture”. He explained: “There is a deep problem in Islam. It’s a world whose values are different. A world in which human life doesn’t have the same value as it does in the West, in which freedom, democracy, openness and creativity are alien.”

And he added: “The phenomenon of the mass Muslim penetration into the West and their settlement there is creating a dangerous internal threat. A similar process took place in Rome. They let the barbarians in and they toppled the empire from within.”

Yet Harry’s Place applauds the LSE for providing this vicious bigot with a platform.

You can imagine how different HP’s response would be if the LSE offered a platform to a Palestinian speaker who supported the ethnic cleansing of Jews from Israel, described Judaism as a religion that is inimical to civilised values and claimed that the Jewish community in the West represents a dangerous internal threat.

HP wouldn’t just be denouncing the LSE for allowing a person with such obnoxious views a platform. They would be demanding that the individual should be banned from entering the UK.