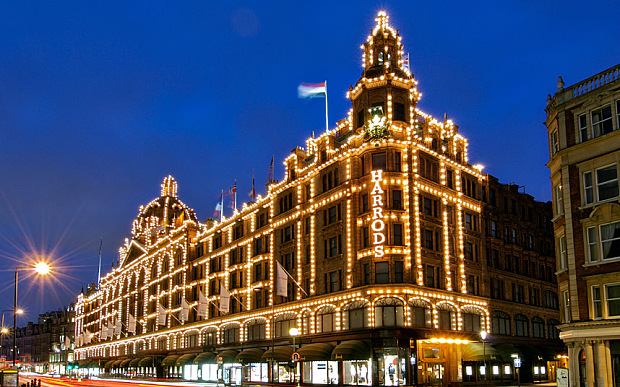 Customers of Harrods are being urged to boycott the department store in a symbolic protest against its Qatari owners.

Qatar, which bought Harrods in 2010, has been accused of either directly funding terrorist groups or turning a blind eye to financiers operating out of the Gulf state.

It is now facing a backlash from protesters sickened by the executions of Western hostages in Syria and the violence wreaked on the region by the Islamic State in Iraq and the Levant (Isil), al-Qaeda and other offshoot terror groups.

Harrods was sold by Mohamed Al Fayed, its previous owner, to Qatar Holdings, part of the Qatar Investment Authority, the state’s sovereign wealth fund, in May 2010 for a reported £1.5 billion. The sale was concluded by Qatar’s then prime minister Hamad bin Jassim bin Jaber al Thani, who was also chief executive of the wealth fund.

Under his rule, Qatar also owns or co-owns a number of other landmarks including the Shard, Europe’s tallest skyscraper, as well as large stakes in some major UK businesses.

Now Harrods is facing a boycott as a consequence of criticism of Qatar’s links to Islamist terrorists.

Mark Lewis, the solicitor who represented the family of Milly Dowler among others in the News of the World phone hacking scandal, is leading calls for a boycott. Mr Lewis said: “We can stand back and do nothing, but when we do, we are paying for that terror … People need to know where their money is going.”

He added: “While people know very little about Qatar, its wealth has bought some of the crown jewels of English property. It owns the Shard, it owns Harrods, it might as well own our morals. The scale of its commercial holdings is such that most of us do not even realise that we are buying into its terrorist operations.”

Baroness Cox, a cross-bench peer and committed Christian who founded an international aid charity, said: “I would back a boycott of Harrods. “As a principle, if people are using their wealth to support barbaric acts of terrorism, they should not be making money in our country and basking in the credibility of such a prestigious place.”

Simon Cobbs, of Sussex Friends of Israel, which has already organised one protest outside the Qatari embassy, said: “We will now target other Qatar-owned businesses including Harrods. We will ensure that Harrods customers know that the money they spend ultimately ends up in the hands of a regime that funds terrorism.”

Qatar has denied funding terrorist groups. Harrods did not return calls at the time of publication.

What do Lewis, Cox and Cobbs have in common? They’re all militant Zionists. It doesn’t require a major intellectual effort to work out that their real objection to Qatar is its support for the Palestinian cause.