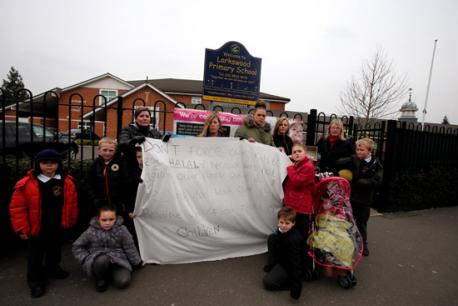 Parents have reacted with outrage over plans to start serving only Halal meat to school pupils.

Management at Larkswood Primary in New Road, Chingford, will stop providing meat slaughtered using ‘standard’ methods and replace it with food which is prepared according to the rituals of Islam from mid-April.

Parents told the Guardian they had no objection to Muslim children practising their faith and eating Halal meat at the school. But said they did not want such religious beliefs imposed on their own offspring.

They also claim not to have been given an explanation for the sudden change and say less than 10 per cent of children at Larkswood are Muslim.

Headteacher Lynne Harrowell said most schools in London served Halal meat and that parents were consulted but the majority did not express a preference. She was unable to provide details how many voted for or against the plans.

Tina Hill, 48, who has an eight-year-old son at the school, said: “Why should their views be forced on us? I think it’s disgusting.

“As parents we should be given a choice what our children eat. I do not want my child eating food which has been slaughtered in this way and blessed. I am so angry about it I would consider taking my son out of Larkswood.”

She said the consultation letter was unclear and many parents had assumed Halal was being added as an option and not as the only type of meat that would be served.

Halal meat is prepared by draining all the blood from the animal, and workers must recite the name of Allah during the slaughtering process. Pork is also forbidden.

Several parents told the Guardian they were strongly against the plans but were too afraid to speak out for fear of being branded racist.

A 32-year-old mum-of-three said: “I don’t understand why they can’t have Halal meat as an option, I think everyone would be happy with that.

“We haven’t been told why they want to do this, but some parents suspect it is because Halal meat is cheaper and will save the school money. I am very angry about it and I will stop my child having hot school dinners if they do go ahead with this. I’ll give him a packed lunch instead.”

A 28-year-old mum added: “I think it’s unfair when it’s only a small minority of the school who are Muslim.”

Ms Harrowell said: “It is in line with the majority of other schools in London and in Waltham Forest. Most of New Zealand lamb is Halal, as is the meat in many restaurants and fast food places like KFC. Many people are very aware that most of us eat Halal meat.

“We have an inclusive school and I’ve only had two complaints, and those parents were very happy we are also having more fish on the menu.”

The results of the school’s consultation can be found here. You’d have thought the Guardian‘s intrepid journalist might have made the effort to check.