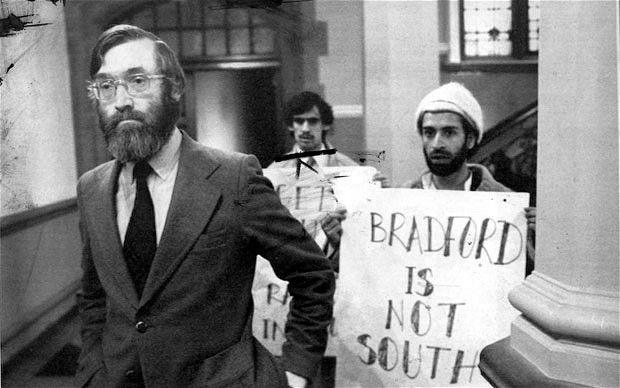 It is a measure of the disorientation produced by the current wave of Islamophobia, and the accompanying assault on multiculturalism, that a liberal newspaper like the Guardian can publish an article lauding a notorious racist.

Here is Ian Jack (following the example already set by Allison Pearson in the Telegraph) writing about Ray Honeyford, who as a Bradford headteacher in the 1980s became a hero for the right because of his noxious opinions:

His views on schools – that they exist to teach rather than entertain or placate – have become orthodox long since. That immigrants “have responsibilities as well rights” is a cliche now embedded in every political party, which also demand that immigrants speak and read English before they take citizenship tests. And on the available evidence, the case of the Birmingham schools seems to show what happens when a version of multicultural freedom prevails, which Honeyford so fiercely opposed. By these lights, it’s hard not to think he was right or, if you prefer it more neutrally, well ahead of his time.

The most Jack is prepared to concede is that Honeyford showed a degree of insensitivity towards minority communities of recent migrant origin.

Jack cites “Education and Race – an Alternative View”, Honeyford’s infamous Salisbury Review article from 1984, observing that it “turned Honeyford from an obscure if opinionated headteacher into a national figure”. However, he omits to provide his readers with a link to the article, even though it is available online. And that is hardly surprising, since the article is quite sickening in its blatant racism.

In it Honeyford didn’t just anticipate present-day opposition to multiculturalism as a policy but expressed open hostility to the very existence of non-white minority communities within the UK. He railed against “the real educational consequences of the general acceptance of the notion that multi-racial inner cities are not only inevitable but, in some sense, desirable”.

His article also featured the most appalling racist stereotyping.

Reporting on a meeting with Bradford Asian parents to discuss education policy, Honeyford wrote: “The hysterical political temperament of the Indian sub-continent became evident – an extraordinary sight in an English School Hall…. A half-educated and volatile Sikh usurped the privileges of the chair by deciding who was to speak.”

He claimed that “educational ambition and the values to support it” were “conspicuously absent” in “the vast majority of West Indian homes”. He sneered that: “‘Cultural enrichment’ is the approved term for the West Indian’s right to create an ear splitting cacophony for most of the night to the detriment of his neighbour’s sanity, or for the Notting Hill Festival [sic] whose success or failure is judged by the level of street crime which accompanies it.”

Honeyford also denounced proposals by the Haringey Black Pressure Group on Education that “Schoolbooks with a racist content should be scrapped. Racist teachers should be dismissed.” He described this as “totalitarian”.

What next from the Guardian? A comment piece arguing that Enoch Powell has been vindicated too?