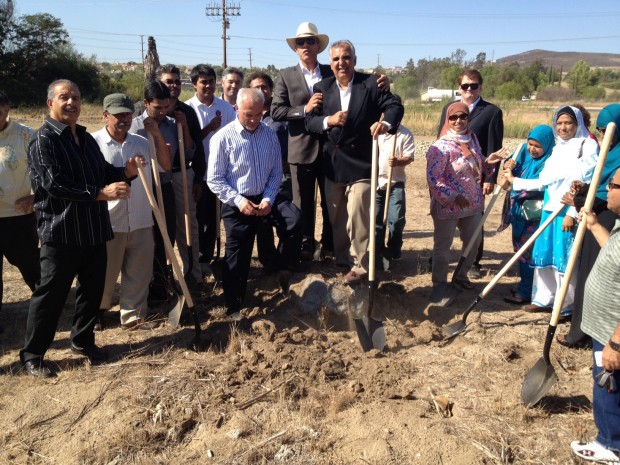 The protests, marathon public hearings and years of meeting in homes and business parks were just memories Friday afternoon.

That’s when members of the Islamic Center of Temecula Valley gathered for a groundbreaking ceremony to celebrate the upcoming start of construction on its long-in-the-works mosque project.

The mosque, which will be built in two phases, will be the center’s first permanent home for its members, who have worshiped in members’ homes and commercial areas in both Temecula and Murrieta.

“This is a glorious day. A day to celebrate. Be proud to be in America, a Muslim in America,” said Emad Rasheed, the center’s chairman, addressing a cheering group of the center’s members.

Alex Irshaid, the project manager, said it will take about six months to complete the first phase, putting the ribbon-cutting ceremony on track for the spring.

The center’s plans for a mosque, which were opposed by a group of Southwest County residents that included some who were concerned about traffic on Nicolas Road and others who said they were trying to protect the U.S. from the spread of Sharia law, were approved by the Temecula City Council in early 2011 when it denied an appeal of the Planning Commission’s decision.

City officials said that 2011 meeting, which ended at 3 a.m., was the longest in the city and, apropos for its length, it wrapped up months of debate that included a protest in front of the center’s former home on Rio Nedo and numerous public forums on Islam and the center’s plans.

After Friday’s ceremony, which included actual dirt being moved as members gleefully dug around a large rock on the site, Rasheed harkened back to that history.

“It took a lot of years,” he said, referring to the center’s work to get the plans approved by the city and its outreach to the community, which included some residents who, he said, expressed “hatred against Muslims.”