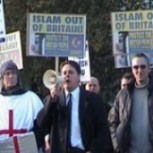 Nick Griffin is leader of the whites-only British National Party and one of the most hated – and, to his many detractors, hateful – men in the country.

He is a former National Front member, convicted of inciting racial hatred against Jews in 1998 and acquitted of similar charges against Muslims in two high-profile trials last year. He is a man who has called Britain a “multi-racial hellhole”, Islam a “wicked, vicious faith”, British Muslims “the most appalling, insufferable people to have to live with”, overt homosexuality “repulsive” and the Holocaust “the hoax of the 20th century”. He has declared that “nonwhites have no place here at all and [we] will not rest until every last one has left our land”.

He warms to the theme, claiming that some Muslims deliberately use heroin – “Paki poison” – to undermine non-Muslim communities around them. “It’s narco-terrorism.” Even worse, he says, is the way that hardline Muslim males deliberately seduce and corrupt “thousands” of young white girls in a practice called “grooming” that the authorities downplay for fear of being labelled racist.

But surely the vast majority of Muslims in this country are good, law-abiding citizens? Griffin disagrees: “The vast majority are entirely decent Muslims, but the better Muslims they are, the less good they are as British citizens.” The Koran orders them to obey the word of God, he says, not infidel governments: “Democracy and Islam are absolutely incompatible.” A Gallup poll this week suggested that 81 per cent of London-Muslims were “loyal to Britain” compared with just 45 per cent of non-Muslims.

In public Griffin appears personable and plausible. Talking in his car, he verges on the paranoid. Many British Muslims subscribe to a form of Islam that preaches a “ruthless, aggressive imperialism”, he says. Its goal is a world-wide caliphate. “It’s a takeover attempt,” he says, and it will end – literally – in civil war. Wherever an Islamic population establishes itself “you get all sorts of bloodshed and horrors and there’s no reason to think that this little part of the world will buck the trends of world history”.

For a 1999 article by Griffin in which he outines his plan to hide the BNP’s fascist politics and portray it as a mainstream populist party see here.