While more than nine in 10 Americans would vote for a presidential candidate who is black, a woman, Catholic, Hispanic, or Jewish, significantly smaller percentages would vote for one who is an atheist (54%) or Muslim (58%). Americans’ willingness to vote for a Mormon (80%) or gay or lesbian (68%) candidate falls between these two extremes.

The results are based on a June 7-10 Gallup poll, updating a question Gallup first asked in 1937 in reference to a female, Jewish, or Catholic candidate and has asked periodically since then, with additional candidate characteristics added to the list. 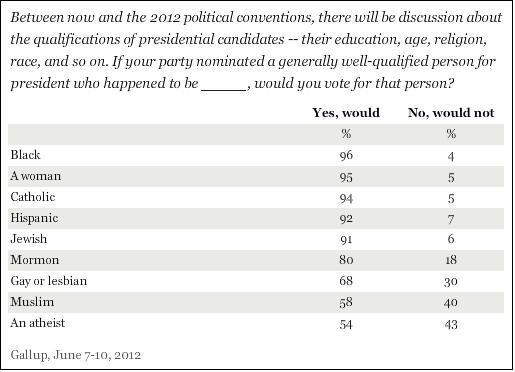