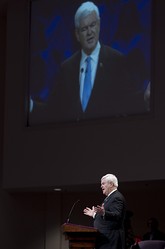 Gingrich said that the religious foundation of America is being attacked on two fronts: “We have a secular elitist wing that deeply, deeply disbelieves in America, that wants to create a different country based on a different set of principles,” he said. “And we have a radical Islamist one which legitimately and authentically hates us and should.”

He drew a standing ovation for slamming a State Department meeting with the Organization of Islamic countries, which Gingrich said had “the purpose of talking about how to protect Islam from being described inappropriately. I have passionate opposition to the government of the United States lying to us and censoring us as we try to understand those who would kill us.”

Secretary of State Hillary Clinton said after the July 2011 OIC meeting “combating religious intolerance” that the United States remains “focused on interfaith education and collaboration, enforcing anti-discrimination laws, protecting the rights of all people to worship as they choose, and to use some old-fashioned techniques of peer pressure and shaming, so that people don’t feel that they have the support to do what we abhor.”

By contrast, Gingrich drew a stark picture of radical Islamists, saying, “Those people who want to kill us want to kill us because from their world view, we are the greatest threat they’ve ever faced because we represent freedom and freedom is the end of their religion.”