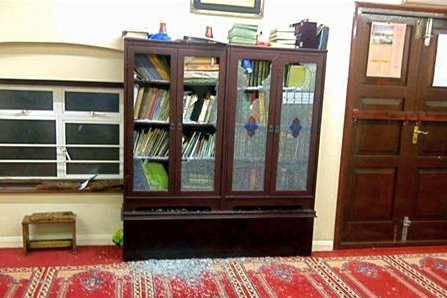 A man has been arrested on suspicion of racially aggravated criminal damage over an attack on a mosque in Gillingham tonight.

Kent Police said officers are providing a visible presence in communities across Kent after a man was murdered in a suspected terrorist attack in Woolwich, south London, today.

It has been reported that display cabinets at a mosque in Gillingham were smashed earlier this evening.

Police confirmed they were called to a report of criminal damage at a religious building in Canterbury Street, Gillingham at 8.40pm. Officers arrested a man at 8.44pm on suspicion of racially aggravated criminal damage.

One witness reported that a man ran in to the mosque and started smashing up windows and bookcases.

Update 2:  See “Man due in court after Gillingham mosque attacked in wake of Woolwich terror murder”, Kent Online, 23 May 2013