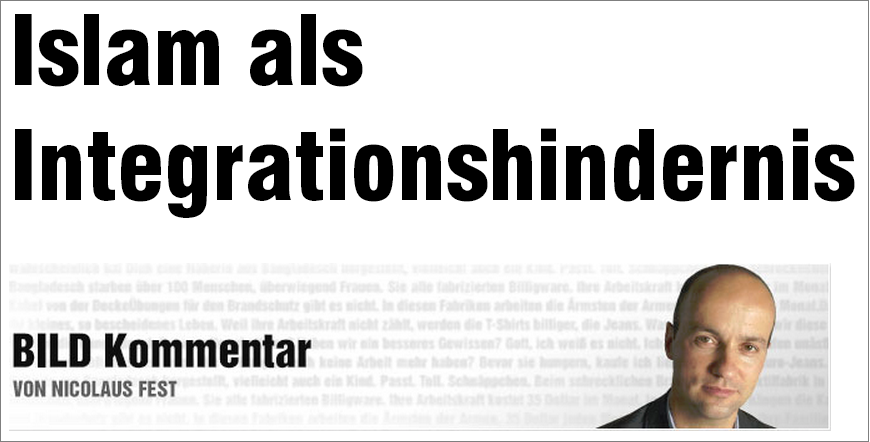 Germany’s biggest newspaper, Bild, was forced to climb down over the weekend after a highly critical and controversial comment piece which attacked Islam as a barrier to integration appeared in its Sunday sister paper.

“I don’t believe in God, but at the same time Christianity, Judaism or Buddhism don’t bother me. Only Islam bothers me more and more,” wrote Nicolaus Fest, vice editor-in-chief of the Bild am Sonntag newspaper in the editorial published on Sunday.

All this, wrote Fest, was making Islam “a barrier to integration” – something which should be weighed up when assessing claims for asylum and visa applications to Germany. “I don’t need any imported racism and I don’t need anything else Islam stands for,” he concluded.

The short piece, which by Monday morning had been shared over 9,700 times on social media, quickly drew harsh criticism of the paper by politicians calling it racist and calling for the paper to apologize to the estimated 4.3 million Muslims in Germany.

“I’m an engineer and a Muslim and I was born in this country this debate is very offensive,” wrote Twitter user Lahieb. Meanwhile, others such as Green party politician Volker Beck took to Twitter to demand an apology from Germany’s best-selling paper.

On Sunday evening, Bild‘s editor-in-chief Kai Diekmann attempted to calm the debate with an online editorial rejecting Fest’s arguments for not drawing the line between Islam as a religion and the political beliefs of Islamism. “For Bild and Axel Springer there has been a clear, unshakeable dividing line between Islam as a world religion and the degrading ideology of Islamism,” wrote Diekmann, Bild‘s editor-in-chief since 2001 and executive board member of the Turkish daily Hürriyet.

“That’s why in Bild and Axel Springer [publications] there is no room for generalized, depreciating comments against Islam and the people who believe in Allah. We don’t want such a debate along religious lines. We don’t want to lead it, take it up or conjure it. For they always end in disaster – history has shown that to us often enough.”