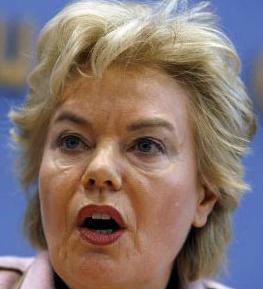 A member of Angela Merkel’s conservatives said on Saturday the electorate would welcome a new political party further to the right.

Christian Democrat (CDU) member of parliament Erika Steinbach also said the party was wrong to condemn central bank board member Thilo Sarrazin, who quit on Thursday after accusing Muslim immigrants of sponging off the welfare state.

“If someone with charisma set out to found a new, really conservative party, he would easily overcome the 5 percent hurdle,” she told Welt am Sonntag newspaper, referring to the minimum vote share required for a party to enter parliament.

On the sensitive topic of Sarrazin, who caused a furor by arguing in a book that Muslim immigrants refused to integrate and lowered the national intelligence, she challenged the line taken by Merkel and the CDU. “(It was) an elementary mistake to thrash the man together with the left-wingers,” she told the paper, adding: “What Sarrazin is saying, that is an issue for us.”