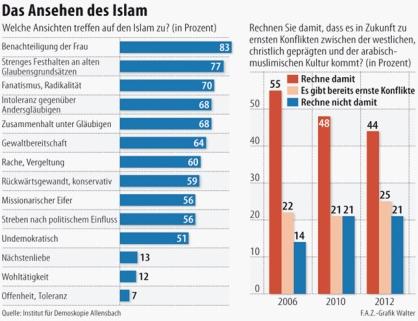 Two weeks ago the Frankfurter Allgemeine Zeitung reported the results of an Allensbach Institute survey of German attitudes towards Islam (a rather clunky and not entirely reliable English translation of the article has been provided by the Russian journal Vestnik Kavkaza).

Respondents were asked to select from 21 statements those which applied to their view of Islam. 83% thought that Islam is characterised by discrimination against women and 77% that adherence to fundamentalist beliefs is typical of the faith, while 70% associated it with fanaticism and radicalism. Clear majorities believed that Islam is characterised by violence (64%), a tendency to revenge and retribution (60%), missionary zeal (56%) and the pursuit of political influence (56%).

Only 13% associated Islam with love for one’s neighbour, 12% with charity and 7% with openness and tolerance.

Respondents were asked: “If someone says ‘Although it’s a private matter, I don’t like it when I see women with headscarves here in Germany’, do you agree or disagree with this statement?” 47% of people agreed with the statement and 34% disagreed.

The FAZ notes that the views expressed about Islam were slightly less negative than in a 2006 poll, also conducted by the Allensbach Institute, although it points out that the 2006 results may have been skewed by the controversy over the Danish cartoons.

Asked whether they expect serious conflicts in the future between western Christian and Arab-Muslim cultures, 44% said they did, compared with 55% in 2006. On the question of whether they saw Islam in general as a threat, or just certain radical groups, 74% identified radical groups as the danger while 19% said the threat came from Islam as a whole – down from 28% in 2006.

Another question concerned the idea of a “clash of civilizations” popularised by Samuel Huntington. In 2004 46% thought that such a clash was taking place, in 2010 the number increased to 58% and now it is down to 43%. However only 34% of respondents explicitly rejected Huntington’s thesis.

We can take some small consolation from the fact that there is no majority for a Swiss-type ban on minarets in Germany, with 39% of respondents supporting such a ban. Given that much anti-Muslim prejudice is the product of ignorance arising from lack of social contact, perhaps the most hopeful finding is that in 2004 only 24% of non-Muslim Germans had Muslim friends, whereas today the figure is 38%.