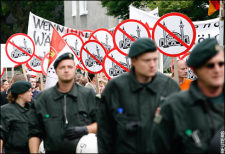 In today’s Observer Kate Connolly reports on prospects for the far right in Germany following the merger between Austria’s FPÖ and the anti-mosque campaign turned political party Pro Cologne.

She points out that it is the anti-Muslim mood whipped up by more mainstream political figures that provides the conditions for Pro Cologne to win support, and quotes Alexander Häusler of Düsseldorf’s University of Applied Sciences as saying:

“The anti-immigration utterings of Sarrazin, backed up by the comments by Merkel and Seehofer, are like a gift to the far right. They have had a door opened to them that has previously been closed, because it is now socially acceptable to say things that before nobody dared to voice.”