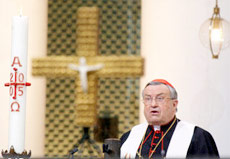 BERLIN — In statements endorsed by the ruling Christian Democratic Union party and harshly criticized by MPs, Germany’s top cardinal has warned against “uncritical tolerance” which could lead to Islam enjoying equal standing with Christianity in the country, Deutsche Welle reported Friday, June 22.

“The neutrality of the state regarding individual religions must not be confused with indifference and uncritical tolerance toward the impact of religions on society,” the German news network quoted Cardinal Karl Lehmann as saying. Lehmann, the head of the German conference of bishops, expressed concern about religious freedom leading to all faiths being treated equally regardless of the size of their flock and their history. He pointed to Christianity’s role in shaping European history and even its legal culture.

Ronald Pofalla, the general secretary of Chancellor Angela Merkel’s conservative Christian Democratic Union party, said Lehmann was right to say Islam could not be afforded the same legal standing in Germany as Christianity. “Unlike Christianity, Islam is not in Europe’s cultural centre and is not reflected in everyday life in the same way,” Pofalla said in a statement.

The leader of the Green party’s parliamentary group, Volker Beck, said Germany’s constitution required Islam be treated the same as Christianity. “The Cardinal is wrong if he concludes that Europe’s or Germany’s undoubtedly Christian character infers a legal discrimination of other religious communities,” Deutsche Welle quoted him as saying.

Lale Akgün, a Social Democratic parliamentarian in charge of Islam issues, said Lehmann’s statements were unrealistic and explosive. “Whoever says that Islam cannot be put on an equal legal footing (as other religions) is stoking social unrest,” she said.