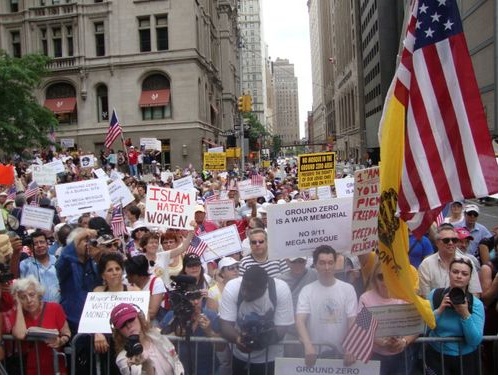 Protestors gathered in lower Manhattan mid-day Sunday to demonstrate against plans to build a mosque near the site of Ground Zero, where the twin towers of the World Trade Center were destroyed by Islamist hijackers on September 11, 2001.

Protest organizer Pamela Geller, a conservative blogger, and her group, “Stop the Islamicization of America,” planned the event because, according to the group’s website, “Building the Ground Zero mosque is not an issue of religious freedom, but of resisting an effort to insult the victims of 9/11 and to establish a beachhead for political Islam and Islamic supremacism in New York… Ground Zero is a war memorial, a burial ground. Respect it.”

Geller said the NYPD and security at the rally told her about 5,000 demonstrators were there. But NYPD spokesman Sgt. Kevin Hayes said the police department’s policy is to not provide crowd estimates and that he could not confirm Geller’s number. CNN iReporter Julio Ortiz-Teissonniere, who attended the rally and sent photos to CNN, said the number was closer to 200-300 while he was there for the first 45 minutes of the event.

“The crowd carried signs expressing their love for freedom, their contempt for Sharia, and their anger at Islamic supremacism and insult to the memories of those murdered on 9/11 that this mosque represents. And we had a full spectrum of top quality speakers…. The theme among all the speakers was common: the mosque is an insult to the Americans who were murdered there. It is a manifestation of a radically intolerant belief system that is incompatible with the freedoms guaranteed by the U.S. Constitution.” 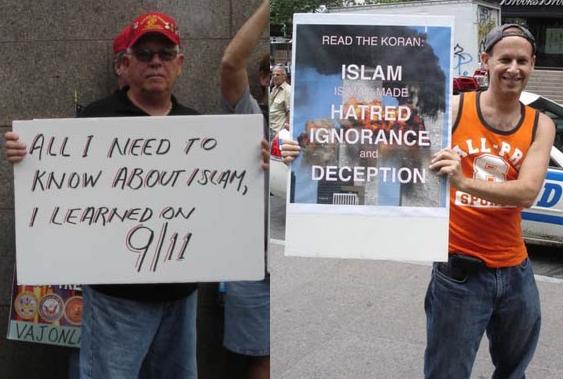