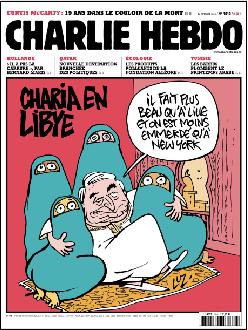 French satirical weekly Charlie Hebdo has named the Prophet Muhammad as “editor-in-chief” for its next issue to mark the electoral victory of Islamist party Ennahda in Tunisia.

It will be renamed Sharia Hebdo, the weekly said in a statement on Monday. The publication’s editor-in-chief and cartoonist Charb said they were not trying to be especially provocative.

Ennahda won the most seats in Tunisia’s October elections and is now trying to form a coalition caretaker government. “To fittingly celebrate the victory of the Islamist Ennahda party in Tunisia… Charlie Hebdo has asked Muhammad to be the special editor-in-chief of its next issue”, the magazine said in a statement. “The prophet of Islam didn’t have to be asked twice and we thank him for it,” the statement said.

The cover of the next issue, which comes out on Wednesday, shows Muhammad saying “100 lashes if you are not dying of laughter”. It will also include an editorial piece by the Prophet entitled Halal Aperitif and a women’s supplement called Madam Sharia.

Charb told the AFP news agency: “We don’t feel like causing further provocation. We simply feel like doing our job as usual. The only difference this week is that Muhammad is on the cover and it’s pretty rare to put him on the cover.”

Ennahda has vowed to work with Tunisia’s more liberal parties, and respect the country’s progressive approach to gender equality.

In 2007, the French magazine’s then editor was acquitted of insulting Muslims by reprinting cartoons of Muhammad which had originally appeared in a Danish newspaper two years previously.