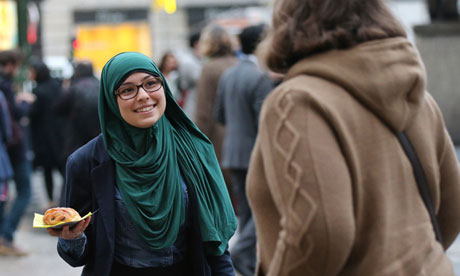 It began at a rally on the Côte d’Azur this weekend when the hardline Jean-François Copé, fighting a tough race to take over Nicolas Sarkozy’s rightwing UMP party, served a pastry-related anecdote that has been repeating on him ever since.

Having already complained of what he called “anti-white racism” on French estates, Copé said he identified with “exasperated” parents who, after a hard day’s work, got home to find their child had had his pain au chocolat “snatched” from him outside the school gates by “thugs” who said: “There must be no eating during Ramadan.” He then tweeted: “There are neighbourhoods in France where children can’t eat their pain au chocolat because it’s Ramadan.”

Outrage and cries of absurdity followed, from both left and right. The Socialist prime minister slammed what he called a “stigmatising” discourse against minorities. The former Sarkozy minister François Baroin, supporting Copé’s opponent François Fillon, warned against “toxic and dangerous little phrases”. Christian Estrosi, mayor of Nice, devoted Sarkozy ally and Fillon supporter, laughed nervously as he joked on radio: “Pain au chocolat is an inalienable right of all French children.”

Meanwhile, the trusty old pain au chocolat – the only French breakfast option to have inspired a hit single, Joe Dassin’s 1969 ‘Le petit pain au chocolat’ about a lovelorn boulangère – has become the new frontier of French satire and political activism. Commentators deplored Copé’s use of a chocolate croissant to court the far-right vote, with one tweet warning of “Le Pen au chocolat”.

On Wednesday morning, volunteers from France’s Collective Against Islamophobia handed out free pain au chocolat to commuters at Saint Lazare station in Paris. Parallels have been drawn with Sarkozy’s copying of far-right scaremongering that unlabelled halal meat was secretly making its way on to the nation’s dinner plates during the last election campaign.

Nadine Morano, a former Sarkozy minister, insisted on French radio that the pain au chocolat story was true and happened four years ago in Meaux, outside Paris, where Copé is mayor. One political cartoon pictured a baker wondering why his chocolate croissants weren’t selling, with the answer: “People are too afraid.”

Brilliant initiative by the CCIF. For the media coverage it generated see here. For an AFP video report see here. 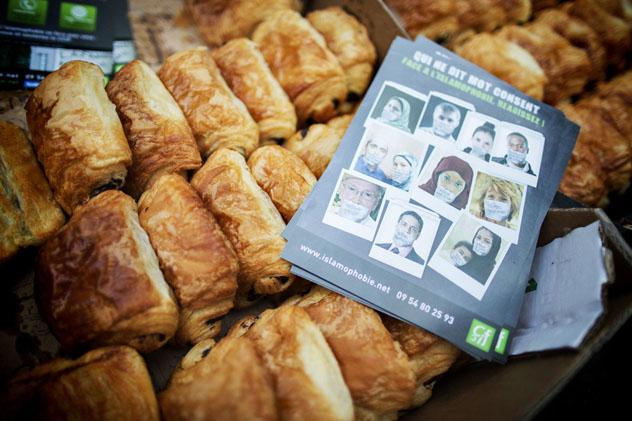