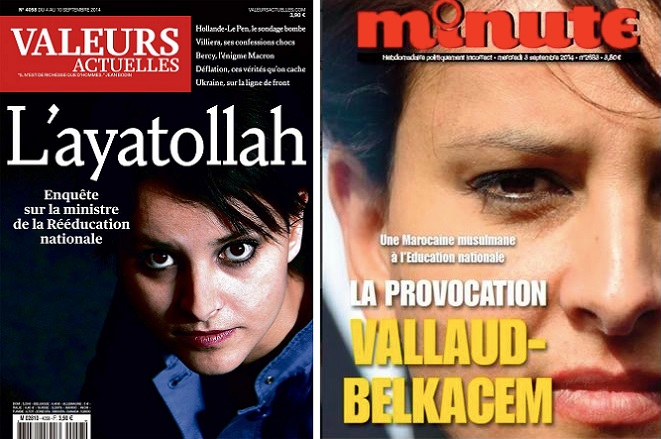 France’s new Muslim education minister called for more respect Wednesday after becoming the target of slurs, while a top Socialist politician said a magazine should be convicted of inciting racial hatred for referring to her religion and ethnic background as a “provocation.”

Najat Vallaud-Belkacem, a 36-year-old rising star in the Socialist Party, said she has been the target of racially-motivated verbal attacks over the last week, including being branded “Ayatollah” by a conservative weekly. “I call for respect,” she told The Associated Press in an email. “And I repeat in particular that racism is not an opinion, but a crime.”

The Morocco-born Vallaud-Belkacem, who doesn’t publicly speak about her religion, is seen as an easy target to attack the unpopular Socialist government led by President Francois Hollande.

She is a young, Muslim woman in a political landscape made up mostly of white, Catholic men. She’s an outspoken defender of gender and racial equality, and supported a divisive law legalizing gay marriage last year. She also intervened in a national debate on the negative impact of halal meat, saying society should stop pointing the finger at Muslims.

One conservative politician referred to Vallaud-Belkacem as a “smiling Vietnamese Communist,” and a fake identity card has appeared on social media falsely claiming she changed her name from Claudine Dupont to a more ethnic-sounding one to get promoted.

A top Socialist Party official threatened legal action against Minute magazine, which in its latest edition calls her religious and ethnic background a “provocation.” The official, Jean-Christophe Cambadelis, said the magazine should be convicted of inciting racial hatred.

Minute, which has sympathies with France’s ever-growing far-right National Front party, faced accusations of racism last year when it put black Justice Minister Christiane Taubira on the cover with the wording: “Taubira Finds Her Banana.”

Taubira tweeted in support of Vallaud-Belkacem: “They must have nothing in their heads, be empty in their heart, and have hardened souls. Najat, you’re flying high with our ambitions for schools. Thanks.”

Valeurs Actuelles‘ cover, to be published Thursday, features the headline “Ayatollah” over a sinister-looking photo of the minister’s face. The publication’s general director said the reference to Islam was purely coincidental despite an outcry that it was racist – and he said the criticism is purely about politics.

“We speak of ‘Ayatollah’ with no reference to the Muslim religion whatsoever … We’re concerned that her nomination poses a problem as she’s pursuing an ideology in schools that worries us,” Yves de Kerdrel told the AP without elaborating.

Government spokesman Stephane Le Foll said, “You can be in disagreement. But we cannot accept these kind of attacks.”

French rights group, SOS Racism, meanwhile, issued a petition in her defense, which has been signed by more than 4,000 people.

Some commentators insist the criticism against her has nothing to do with religion or her sex. “She just has no competence in education.” Versailles deputy mayor Francois-Xavier Bellamy said.