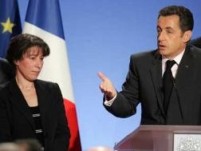 A Muslim member of the French government has backed a court’s decision to deny citizenship to a Moroccan woman who wears the burqa. Urban Affairs Minister Fadela Amara said she hoped last month’s ruling would “dissuade certain fanatics from imposing the burqa on their wives”.

“The burqa is a prison, it’s a straightjacket,” she told Le Parisien. “It is not a religious insignia but the insignia of a totalitarian political project that advocates inequality between the sexes and which is totally devoid of democracy.”

Ms Amara, who is also a prominent women’s rights campaigner, said she made no distinction between the veil and the burqa, describing both as symbols of oppression for women.

As one critic notes about Fadela Amara:

“She says she speaks for women, but she only speaks for women who share her vision of what women should be. Does she speak for the Muslim sister? … The average French Muslim sister just trying to live her day? Like me? I mean nothing to feminists like Fadela Amara or anyone from Ni Putes Ni Soumises simply by dint of my belief that a woman in a headscarf, or a woman in a burqa, deserves the same presumption of free will and sound mind as some braless chick with a visible thong.

“I will never abide by the belief that headscarf=the patriarchy. In fact, men telling me what to wear=patriarchy. I know I have the free will to decide what I will wear in the morning, and I use that free will. I only wish people would ‘assume’ that Muslim sisters in fact are woman enough to have free will when it comes to dressing ourselves. We’re not toddlers….

“And regardless of how I feel about niqabs or burqas, the bottom line is that this sister met the requirements and they said no based on her clothes. You can’t tell me a man would be refused nationality for his clothes. For me, the decision is anti-feminist, unacceptable and sets a bad legal precedent….

“The reasoning behind the judgement alleges that this woman can’t possibly be thinking with her own brain, which is an anti-feminist insult in itself. Fadela calls herself a feminist but what she and the rest of the people involved in this decision are really doing is reinforcing the patriarchy in keeping this mother down. Shame on her. Shame on them.”