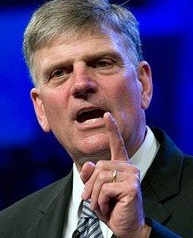 “We should be afraid of sharia law” in America, and Muslims here who want to practice sharia should go back to where they came from, “to those nations that recognize sharia law,” said Rev. Franklin Graham, head of the Billy Graham Evangelistic Association.

In a recent interview with the Charlotte Observer, Graham was asked, “Some say you demonize Islam, and Christians in this country have opposed building a mosque or are worried about Sharia law. Isn’t it –”

Graham, who oversees the international Christian aid group Samaritan’s Purse, said, “We should be afraid of Sharia law. We should be absolutely afraid of it. No question about it, because there’s no tolerance in Sharia law. It persecutes those that do not believe in Islam.”

“And I would say to Muslims in this country, if they want to practice Sharia law, go back to where you came from, to those nations that recognize sharia law,” said Graham. “But we have our own laws here.”