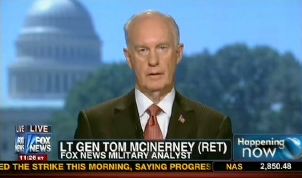 A retired three-star general railed against the Obama administration, political correctness, the media and rules of engagement during a speech Monday night at Sandhills Community College.

Thomas G. McInerney, who retired from the Air Force in 1994 as a lieutenant general, currently serves as a Fox News military analyst and was invited to speak by the Moore County Republican Party. The general was originally slated to talk about how military downsizing may affect preparedness, but changed his topic to instead address current threats facing the nation.

McInerney presented views that he called “more harsh” than his Fox News commentary.

McInerney said the economy, shrinking military and more than a decade’s worth of U.S. policies in the Middle East have only increased the dangers facing the nation. “These are very dangerous times for America,” McInerney said. “We are leading from behind, and that’s why these things are happening. You cannot lead from behind. Someone has to lead.”

The biggest threat, McInerney said, is radical Islam, and the general said the onus for “cleaning house” has to be on the Muslim community. McInerney said American leaders are afraid of offending Muslims, and said radicals have hidden behind their religion.

Earning applause from the audience, he compared Islam to Nazis, Fascism and Communism. “Political correctness is killing us,” he said. “It is a global war against radical Islam. Let’s call it what it is … Islam is not a religion of peace.”

McInerney said his strong feelings have been developed since the Sept. 11 terrorist attacks.