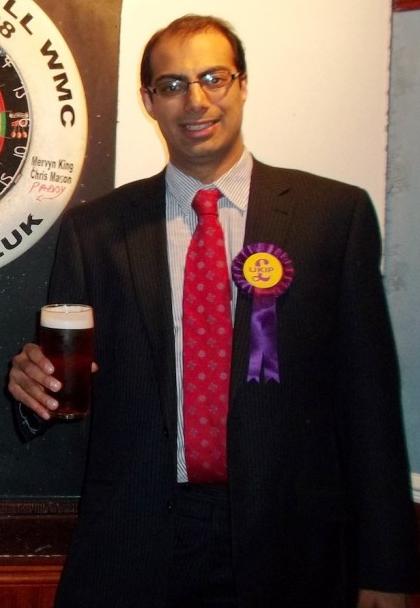 Yesterday’s Guardian interview with UKIP leader Nigel Farage, in which he stated that he intended to re-examine his party’s manifesto commitment to “tackle extremist Islam by banning the burqa or veiled niqab in public buildings and certain private buildings”, and didn’t personally support such a ban, hasn’t gone down too well with some people.

Over at the Mail‘s Right Minds blog (edited by Simon Heffer) we find former prominent UKIP member Abhijit Pandya upholding the view that a ban is justified because the veil is “a deliberate political statement whose meanings any free democratic society, least of all one that pretends to believe in women’s freedom, should consistently and unapologetically challenge”. Pandya continues:

That the one time UKIP leader Lord Pearson had the courage to recognise the political necessity of confronting this political issue, was a break from the normal political apathy towards protecting our culture. That Nigel Farage is considering abandoning this commitment ought to force us to ask whether there is any courage left amongst our politicians to fight for our cultural heritage and gender equality.

This criticism of Farage as having gone “soft on Islam” echoes recent comments by another ex-UKIP member, Paul Weston of the British Freedom Party.

As for Pandya, you may recall that he was UKIP’s candidate in the Leicester South by-election last May, when he attracted attention over the anti-Muslim views he had posted on his blog. Claiming that Islam is “morally flawed and degenerate”, Pandya demanded: “Why should Britain, the country that fathered the modern world, put up with this, as Wilder’s [sic] put it, ‘retarded ideology’.” He also asserted that Islam is hostile to the British work ethic and proposed the “forced repatriation” of Muslims who claim unemployment benefit.

Both Weston and Pandya have now left UKIP, but you suspect their views are not untypical of a section of the membership (one former member once wrote of the party that “Islamophobia pervades its internal dialogue”). Farage no doubt reasons that by ditching the controversial “burqa ban” policy his party may find it easier to attract disillusioned Tories, but he is unlikely to achieve this reform of the party programme without facing a revolt in the ranks.

Incidentally, Pandya’s Wikipedia entry states that he has rejoined the Tory Party, from which he defected to UKIP in 2009. Is this accurate? It is difficult to see how a man who has publicly proclaimed such obnoxious views about the Muslim community could be readmitted to a party that claims to have renounced racism and bigotry.