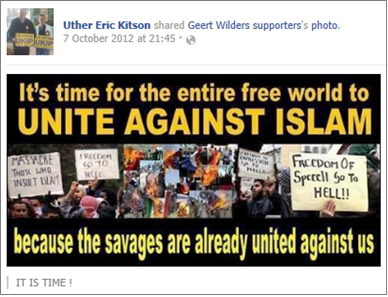 A UKIP councillor who admitted sharing offensive material about Muslims on Facebook will not face charges, the Crown Prosecution Service has said.

West Mercia Police said Eric Kitson, 59, was questioned but not arrested over “concerns raised by the public”. In May a computer was seized and a property in Stourport searched for evidence. The CPS said there was “insufficient evidence” to charge the former Worcestershire county councillor.

Mr Kitson resigned from the county council less than two weeks after winning the Stourport-on-Severn seat on 2 May. He apologised for sharing racist cartoons on the social networking site, which he said he had done only to show people how “disgusting” they were. The UKIP member has since closed his Facebook account and has said national media attention had made him “really, really ill”.

Jayne Salt from the West Midlands CPS said: “Having had an opportunity to review all of the evidence which was made available to us by the police, we looked at a number of options to examine whether any criminal offence had been committed. Whilst many will have found [the messages] wholly socially unacceptable, there was not sufficient evidence to show that they were either threatening or posted with an intent to stir up religious hatred. Therefore, this did not reach the evidential standard required to enable a prosecution.”

As we never cease to point out, the religious hatred law is almost entirely useless and provides the Muslim community with no real protection against incitement to hatred. As the CPS spokeswoman states, it is indeed the case that unless the material that incites hatred contains actual threats, and unless it can be shown that the intention was to stir up hatred, a prosecution under the religious hatred law will fail. The example of BNP activist Tony Bamber, acquitted in 2010 on a charge of incitement to religious hatred, illustrates this.

Once again it is necessary to stress the importance of a future Labour government amending the religious hatred law in order to provide the Muslim community with the same protection that the Jewish and Sikh communities have under the racial hatred law. In the meantime, there are other legal remedies to hand. There is no reason I can see why the West Midlands CPS couldn’t have charged Kitson under the Communications Act, as a number of anti-Muslim hate-mongers have been, most recently Shaun Tuck.