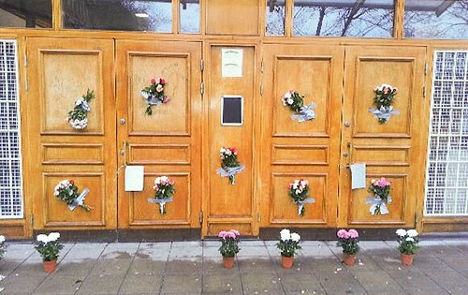 Last Thursday morning, members of the Stockholm Muslim congregation arrived at the mosque on Södermalm to find the doors were covered in Nazi graffiti. By Monday morning, however, a much more positive display had taken their place: bouquets of pink and white flowers were taped over the black swastikas, and a note of solidarity was tied to the door. “For every hate crime there is a flower,” the sign read. “An attack on you is an attack on Sweden! We stand together!”

Flowers were also placed outside the mosque in Fittja, which had its windows smashed and pig feet tossed in back in November, as well as a Hagsätra church which had also been vandalized with swastikas last Friday.

“I thought society was moving the wrong direction. But now my view changed 180 degrees,” Omar Mustafa, chairman of the Swedish Islamic Association, told The Local. “Members of the congregation arrived for the morning prayer at 7am and called me saying there were flowers on the mosque. They sent me a picture and I felt strength and encouragement in a whole new way.”

The mosque in central Stockholm, which opened its doors in 2000, is no stranger to vandalism, receiving threats and falling prey to hate crimes each month. But Wednesday’s attack was unusual in its magnitude and directness.

“We’re used to receiving hateful emails and letters, so they’re not abnormal. But they also don’t feel so real,” Mustafa mused. “But I’ve never seen something like this before, right on the front door. It was a very strong message of hate.”

The mosque had been vandalized before, but not with swastikas, representatives said. The attack followed close on the heels of a neo-Nazi attack in the suburb of Kärrtorp, which was later met by a display of solidarity when more than 16,000 Swedes gathered to peacefully demonstrate against racism.

Mustafa said he hopes such actions against racism will encourage others to speak up. “We know that a majority of people in Sweden are against hate and racism. But the majority is also very quiet. What was surprising this time was that the majority actually acted, in solidarity, support, and love,” Mustafa said.

In 2013, around 300 hate crimes against Muslims were reported in Sweden, and such incidents are on the rise according to the Swedish National Council for Crime Prevention (Brottsförebyggande rådet). Innumerable crimes also go unreported due to fears that media exposure will increase hate crimes. And Mustafa fears things may get worse before they get better, especially with Swedish elections coming up this fall.

“Hate is becoming more and more open, and 2013 was a very difficult year,” he said. “There were a lot of debates about racism, and many were very negative. I am very afraid that racist parties and movements will win more seats and become a bigger part of decision-making, as we’ve seen in Denmark and Norway. But I hope this kind of action helps more and more people take action.”

Mustafa and others posted images of the flowers on social media sites, which spread like wildfire and garnered attention and support in Sweden as well as abroad.

“When you get this kind of support in flowers or social media, you suddenly feel that you are not alone,” Mustafa told The Local. “It’s proof that society is not racist on the whole. I don’t think that the flowers will knock out racism, but it is a strong message. And I think more and more people are lifting their voices against racism and taking action, and I think more and more will.”