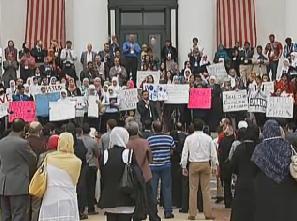 TALLAHASSEE — Ignoring about 50 people who wanted to testify – and with a total of three minutes of deliberation – a Senate panel Tuesday slammed through a measure that both Muslims and Jews say is discriminatory and would prohibit them from freely practicing their religion.

The 5-2 vote by the Senate Criminal and Civil Justice Subcommittee approved legislation, SB 1360, that would ban any court or legal authority from using any sort of religious or foreign law as part of a legal decision or contract.

Some supporters acknowledge the bill was targeting Sharia law, the Koran-based code used by Muslims that, in the words of the Florida Family Association that supports the bill, “authorizes polygamy, pedophilia and perpetuates violence toward women and death for dishonoring the faith.” Similar bills have been filed by conservative Republicans in other states and in Congress, where Rep. Sandy Adams, R-Orlando, is a prime sponsor.

But to many Muslims, the bill directly targets their religion. And it’s made odd bedfellows out of many Muslims and Jews, who say the law could also impact some of their traditions.

Andrew Rosenkranz, regional director for the Anti Defamation League, said that the decisions of Jewish tribunals called Bet Dins, which often handle divorce proceedings, are often converted into civil divorce decrees by the courts. But under the Senate bill, and another ready for a vote by the entire House, an observant Orthodox couple would “effectively be barred from following their faith and using a Jewish tribunal to dissolve their marriage,” he said.

“The alleged threat of Islamic, other religious or foreign law to Florida’s court system is completely illusory, and the Senate’s consideration of this measure is an unwise use of resources,” Rosenkranz said, adding that both the Florida and U.S. constitutions “already prohibit the unconstitutional application of foreign law in the courts.”

But neither representatives from the ADL nor about 50 Muslims who were visiting Tallahassee as part of Muslim Day at the capital were allowed to speak at the meeting, which had more than 20 bills on the agenda and started late.

“They kind of shoved it to the end, and they didn’t really let us discuss it,” said Ahmed Bedier, founder of United Voices of America, which works on minority issues. “You have like 50 people against it. They didn’t let a single person speak.”