The prosecution was brought after up to 20 people, some draped in St George Cross flags and one wearing a rubber pig mask, descended on The Broadway on the night on Friday, February 28. Their target was Hosans kebab van.

Chants of “Muslim groomers off our streets – go back to your own country,” and “no surrender to the Taliban” filled the room at Reading Magistrates’ Court on Tuesday as footage from police officers’ body cameras was screened. Naomi Edwards, prosecuting, said: “Protesting is fine and proper but this went beyond what’s acceptable.”

They had been charged with a Section 5 offence of religiously aggravated harassment but a scheduled three-day trial was avoided after all but Mr Hazel – who denied the offence – admitted a lesser charge of using religiously aggravated, threatening, abusive or insulting words or behaviour likely to cause harassment, alarm or distress.

Ms Edwards said the protest was against a “perceived injustice” – specifically, that police had failed to properly investigate an EDL member’s assertion that young girls were being groomed.

Giving evidence, Mr Hazel said: “An employee of Hosans van was known to give alcohol, free food and drugs to young girls aged 13 to 14. The parents of one girl told one of our supporters and he did a sting operation. He sent a text message (pretending to be the girl) to the man and got messages back like : ‘I love, you; don’t tell your mum; meet me after school.’”

He claimed: “Our supporter, who gave the texts to the police, was arrested himself. The young girls offered to make statements to police but they weren’t believed and warned that, as the EDL was involved, they faced possible charges themselves.”

But Mr Hazel then denied specifically targeting the van and claimed the slogans were “humourous, football-style chants” aimed at “raising awareness.” Ms Edwards asked: “Phrases like ‘paedo kebabs off our streets’ wouldn’t have caused distress to the occupants of Hosans kebab van?” Mr Hazel insisted the chants were “not directed at anyone.”

Convicting Mr Hazel, district judge Davinder Lachhar said: “There was suspicion that an employee of this van was involved in grooming young girls; you felt the police and your MP didn’t investigate to your satisfaction – therefore you took it into your own hands to go to this particular van. It doesn’t take a genius to work out why. To say these comments weren’t directed towards them is absolute nonsense.”

She added: “You were shouting the name of the van and making ‘paedo’ comments. I’ve seen the behaviour of the group – you weren’t just ‘raising awareness’ – far from it. There was someone wearing a pig mask, ‘bacon’ being shouted and things about Muslims being shouted. It was getting out of hand.

“You say you don’t remember children being in the area – of course you were aware. You had the megaphone and I don’t believe for a moment that your comments weren’t aimed at that particular van. If this wasn’t religiously aggravated, I don’t know what is.”

Rory Rowbottom, who has already served a prison sentence after being convicted of throwing a pig’s head at a mosque, managed to get himself arrested again last month for harassing participants at a Gaza protest in Newbury. 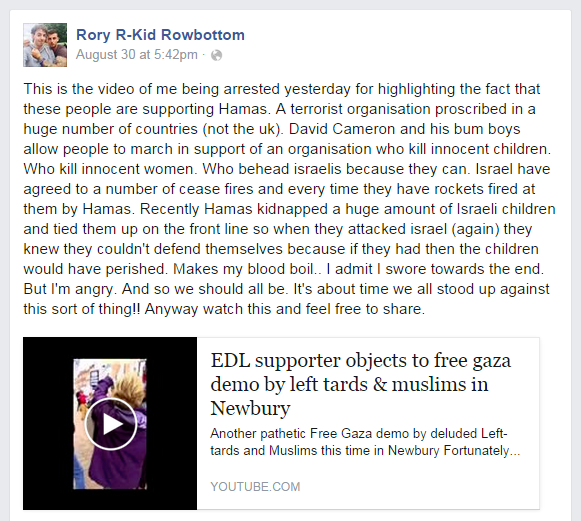 As for Gary Hazel, we came across him two years ago when his campaign against halal slaughter was featured in the Bournemouth Echo. Hazel assured the paper that the campaign had nothing to do with anti-Muslim bigotry and was motivated solely by a concern for animal welfare: “A lot of people confuse the issue with race and religion. That’s a distraction. For me, it’s animal cruelty, and the way they slaughtered.” Hopefully, in future, the Echo will treat Hazel’s lies with the same contempt that the district judge did.