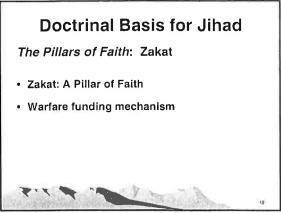 The FBI is teaching its counterterrorism agents that “main stream” [sic] American Muslims are likely to be terrorist sympathizers; that the Prophet Mohammed was a “cult leader”; and that the Islamic practice of giving charity is no more than a “funding mechanism for combat.”

At the Bureau’s training ground in Quantico, Virginia, agents are shown a chart contending that the more “devout” a Muslim, the more likely he is to be “violent.” Those destructive tendencies cannot be reversed, an FBI instructional presentation adds: “Any war against non-believers is justified” under Muslim law; a “moderating process cannot happen if the Koran continues to be regarded as the unalterable word of Allah.”

These are excerpts from dozens of pages of recent FBI training material on Islam that Danger Room has acquired. In them, the Constitutionally protected religious faith of millions of Americans is portrayed as an indicator of terrorist activity.

“There may not be a ‘radical’ threat as much as it is simply a normal assertion of the orthodox ideology,” one FBI presentation notes. “The strategic themes animating these Islamic values are not fringe; they are main stream.”

Focusing on the religious behavior of American citizens instead of proven indicators of criminal activity like stockpiling guns or using shady financing makes it more likely that the FBI will miss the realwarning signs of terrorism. And depicting Islam as inseparable from political violence is exactly the narrative al-Qaida spins — as is the related idea that America and Islam are necessarily in conflict. That’s why FBI whistleblowers provided Danger Room with these materials.

Over the past few years, American Muslim civil rights groups have raised alarm about increased FBI and police presence in Islamic community centers and mosques, fearing that their lawful behavior is being targeted under the broad brush of counterterrorism. The documents may help explain the heavy scrutiny.