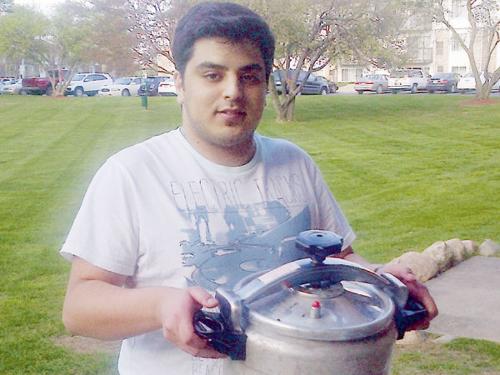 A pressure cooker put a Saudi scholarship student in an embarrassing situation in the United States.

The FBI sleuths surrounded the residence of Talal Al-Rouqi after receiving complaints that he was spotted with a pressure cooker outside his house in ‘mysterious circumstances’.

The FBI team rushed to his apartment in Michigan State and interrogated him. They searched his apartment and inspected the pressure cooker but found nothing unusual.

The officials returned after discovering that Talal took the pressure cooker to the apartment of a fellow scholarship student simply to prepare Kabsa, a dish of rice and meat served mostly in Saudi Arabia.

It was an American lady who called FBI officials to inform them that she spotted a Saudi youth, living in her neighborhood, leaving his home with a big pressure cooker in his hand. She informed that the ash-colored cooker apparently looked like the one used in Boston Marathon bombing last month.

During the Boston Marathon on April 15, two pressure cooker bombs were used by the Tsarnaev brothers, killing three people and injuring 264.

Talal told Okaz/Saudi Gazette that he was shocked to see FBI officials on his doorstep in the morning the other day. “While I was taking breakfast, I heard doorbell kept ringing in an unusual way. When I rushed out, I saw FBI officials on the doorstep.”

He said that the officials asked him many questions in a gentle manner. “They wanted to know about my course of study, date of arrival in US and the activities that I used to engage outside the university campus. Then, they asked me about taking a pressure cooker outside the apartment. I explained to them that I took this to the apartment of my friend, who is also a scholarship student, to prepare Kabsa as dinner,” he said.

Talal said that FBI officials wanted to see the pressure cooker and they checked it thoroughly. “When they found nothing unusual, they cautioned me not to venture out again with the pressure cooker. When I informed the Saudi Embassy about it and conveyed my anxiety over this, the officials tried to calm me down. They also said that the embassy received several calls from Saudi students with regard to inspections and raids on their premises,” he said.