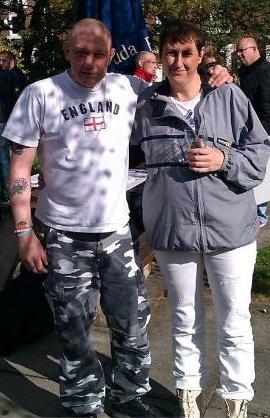 ‘Angel’ unites with a ‘patriot’

Anti-fascists claim Far Right extremists are establishing roots in Sunderland and spreading racial hatred across the city via Facebook.

Activists from Hope not Hate claim a Wearsider using the alias “Angel Unites Patriots” is playing a central role in organising Far Right demonstrations against Muslims living in the city.

The organisation also claims the user behind “Angel” was among crowds of English Defence League (EDL) supporters chanting anti-Muslim slogans at last month’s demo against proposals for a new mosque of St Mark’s Road in Millfield.

Online postings seen by the Echo suggest “Angel” is a primary mover in getting Far Right activities “up and running in Sunderland”.

Comments have also been left in which Muslims in the city are described as “Muzrats” and “Muzzies”. One post says: “Just had a Muzrat in shop asking why I don’t have any clothes for her”.

On their websites both Hope not Hate and the Tyne and Wear Anti Fascist Association (TWAFA) have condemned the racist comments, branding them “disgusting and derogatory”.

Concerns about the establishement of Far Right extremism in the city has grown in recent months following a series of protests over the citing of the new mosque.

Three people were arrested during last month’s protest which saw up to 80 EDL demonstrators clash with anti-fascist organisations.

A spokesman for the Tyne and Wear Anti-Fascist Association said: “We know there is a Sunderland EDL running in the city, but we know other groups are also getting involved with them. This is a network that is starting to establish itself and the issue with the mosque has given them an excuse to voice their views.”

Hope not Hate says it has been monitoring the activities of extremists in Sunderland over recent months and have become increasingly concerned with the postings made by “Angel”.

The Echo understands Far Right groups have also tried to distribute thousands of leaflets across the city in a bid to recruit more members.