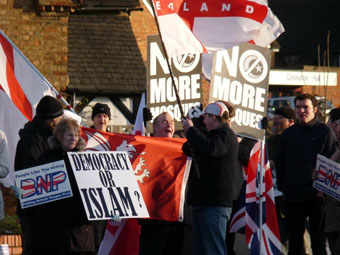 The British National Party reports on their latest demonstration in Bletchley against the proposed conversion of a disused former biker bar into a mosque and community hall.

They claim 150 supporters participated in the protest (no doubt an exaggeration) but apparently less than half of them followed the BNP’s Milton Keynes organiser Kieren Trent to a meeting in a local pub to hear a speech from Buckinghamshire sub-regional organiser Matt Tait.

In line with the BNP’s reformulation of its traditional racism in cultural rather than explicitly ethnic terms, Tait told his audience that that people were “beginning to see that they are being slowly but surely colonised by foreign peoples and alien cultures” and committed the BNP to “safeguard the future of our English communities in our homeland against the threat of mass immigration”.

As for Kieren Trent, you may recall that he featured a year ago in the Channel 4 TV documentary, “Young Angry and White“. It ended with Trent, appalled by the BNP’s decision to revise its whites-only membership rule, going off to join the National Front, whose politics he found more compatible with his aim of achieving an ethnically pure Britain, and he paid tribute to the “inspirational” example of veteran NF hardliners who had remained true to their neo-Nazi views for decades. By the time of the May 2010 elections, however, Trent had apparently gravitated back to the BNP, and was one of a group of BNP canvassers who got involved in a violent clash with anti-fascist Asian youth in Barking.

Perhaps the local paper might consider drawing Trent’s political record to their readers’ attention the next time they provide him with a platform to denounce the “creeping Islamification” of Bletchley. 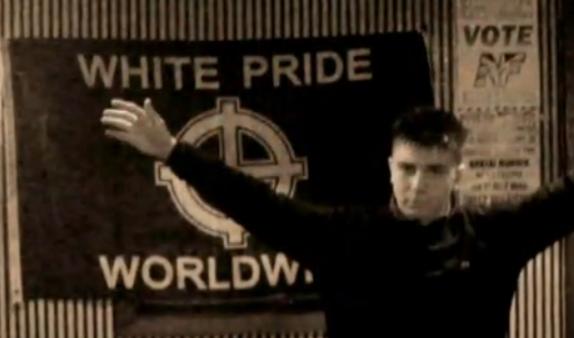