A protest date has been fixed by a new right-wing organisation over “sexist and offensive” signs at a Crayford mosque. Members of the English National Resistance (ENR) are angry the North West Kent Muslim Association’s mosque in Crayford High Street has separate entrances for men and women.

The rally, arranged by former BNP councillor for Swanley Paul Golding, was due to take place on April 6. However it was postponed due to the lack of notice and it clashing with a march in Brighton. Now a group of 50 to 100 people are set to meet at Crayford Rail Station at 1pm on Saturday, May 18, before marching to the mosque in the High Street.

Mr Golding told News Shopper last month the rally was sparked by Facebook complaints about the “sexist signs” and Muslims praying in the street outside the mosque.

He said: “The ENR is opposed to the treatment by muslims of women as second class citizens and objects strongly to the NWK mosque in Crayford insisting on a form of apartheid, or segregation, of women in line with Islamic principles that view women as inferior to men. To find that fundamental medieval attitude on the streets of Crayford in an ex-Christian church, we were appalled.”

Here is an insight into the mentality of the ENR. They don’t like bad language, but have no objection to “jokes” about killing Muslims. 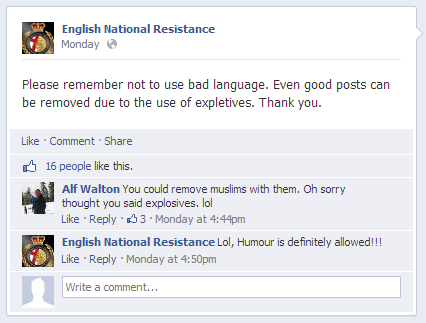