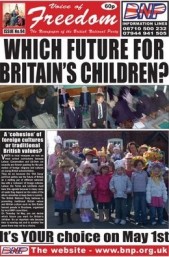 “… it’s the future of our children that I believe is the most important issue people should have on their minds when they vote on May 1st. The two photos are of schoolchildren from Yeovil in Somerset visiting a mosque, and children in an Easter bonnet parade organised by local BNP councillors in Broxtowe.

“Voters have got to decide which road they want this country to go down because in a few years time we might not be able to make a choice.

“With the building of new mosques becoming an issue for many local authorities, it is vital that there are BNP representatives on councils to ‘whistleblow’ when the ‘Old Gang’ parties try to usher these applications through with out consulting with the public.”

Voice of Freedom editor Martin Wingfield plugs the next issue of the British National Party’s paper.