LONDON:  Members of the racist English Defence League (EDL) staged a protest outside Regent’s Park Mosque here during Jummah prayers, attempting to spark confrontation between the worshippers and the EDL but the Metropolitan police intervened to stop the break out of violence.

Dozens of EDL members arrived outside London’s historic mosque for the timing of Jummah prayers to provoke the worshippers into a confrontation but it’s believed that at least three people arrested belonged to the EDL. A spokesman of Scotland Yard told The News that “a man has been arrested for attacking the police and two are in custody for causing affray during the protest”.

The turnout for Jummah prayers due to the Easter Holidays was more than the usual and arrangements were made also in the car park of the mosque to accommodate thousands who had turned for the prayers.

The EDL protestors, draped in England flags and most of them drunk and abusive, arrived half an hour before the prayers and started shouting racial epithets over their own loudspeaker, accompanied by patriotic music such as “God Save the Queen”. They called Muslims “terrorist scum”, “go back to your countries”, “Muslims not needed”, “shut down the mosques”.

Daanish Alam, a Pakistani student at the London School of Economics (LSE) who was present inside the mosque for Jummah prayers, told The News that the confrontation began after the prayer service had finished, when the EDL began to goad the Muslims as they walked by.

A group of Muslim men also started chanting slogans in retaliation but more than 150 policemen present on the occasion formed a human chain between the protestors and saved any confrontation. The situation became so serious that a police helicopter began circling overhead as the confrontation became more intense.

The demonstration was called to protest against Anjem Choudary’s extremist group but in fact targeted the Muslim community as a whole. The EDL were joined by members of Britain First, who report their participation at the event under the headline “Britain First activists face down the Muslim hordes outside the Regents Park mosque”. Despite the involvement of two far-right groups, the demonstration attracted no more than 60 people, by my count. 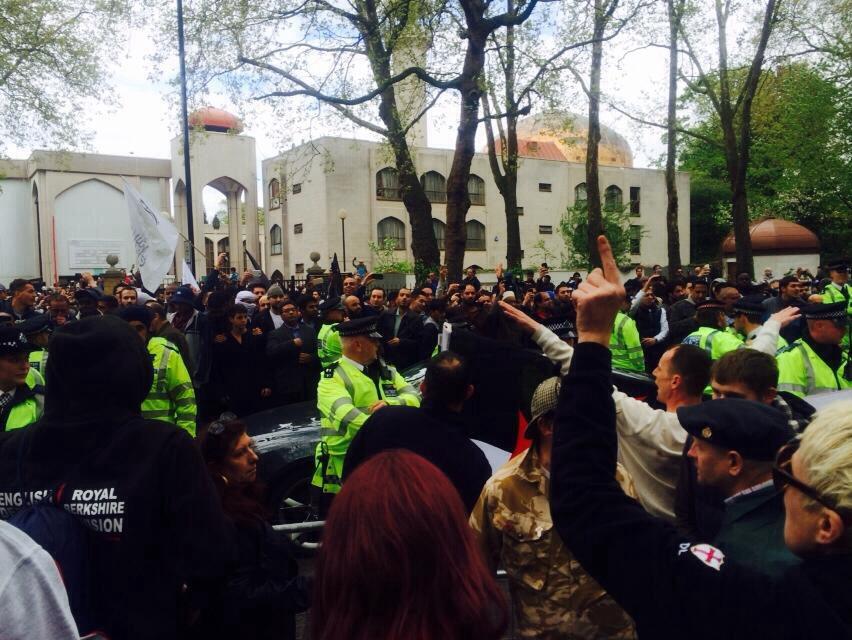