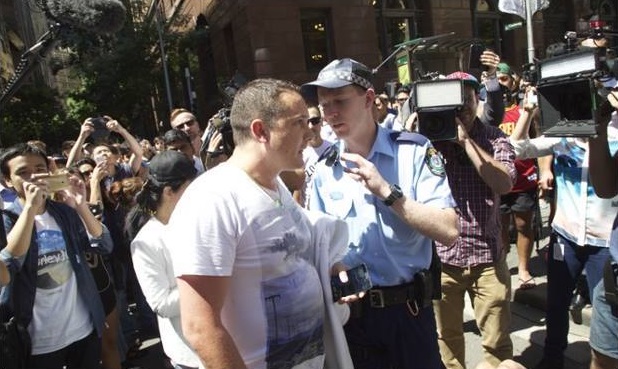 Ralph Cerminara, president of Australian Defence League, burst into an angry rant and had to be escorted away by police after an outburst near the Lindt Chocolat Cafe in central Sydney as the hostage crisis continued.

“Half the reason we’ve got this problem today is because of left wing bigots… These people may be murdered because of your left wing bigotry… It’s finally happened!” Cerminara shouted angrily before being taken away by police.

Cerminara’s flare-up was an ominous warning of the backlash the Muslim community could face when the siege is finally resolved. And a terrorism expert agreed, saying that racist attacks targeting Australia’s Muslim community are “quite likely”.

Ben Rich, a researcher into political violence at Monash University’s School of Social Sciences, said some Australian Muslims could face reprisal due to the incident in Sydney.

“I can’t say to what extent it’s going to be, but I’d say it’s quite likely,” Mr Rich said. He predicted that any violence would probably not be “organised by any particular political party” but was more likely to be “just a group of guys deciding ‘let’s go do something, let’s go attack someone’.”

He pointed to reprisal attacks against Muslims following recent terror acts in Chechnya and in England after the killing of British soldier Lee Rigby in 2013. “This type of thing brings out a lot of latent tensions in people,” Mr Rich added.

However, the Grand Mufti of Australia, Professor Ibrahim Abu Mohamed said he and the Australian National Imams Council are devastated by the incident in Martin Place.

“[We] condemn this criminal act unequivocally and reiterate that such actions are denounced in part and in whole in Islam,” he said in a statement. “We along with the wider Australian society await the results of the investigation about the identity of the perpetrators and their underlying motivations behind this criminal act.”

The former president of the Australian Federation of Islamic Councils Rehin Ghauri agreed, saying he was more worried about the welfare of the hostages inside the cafe than about the possibility of reprisals against Muslims.

“I”m concerned about my Australian brothers and sisters,” Mr Ghauri said. “We view every event like this with grave concern… Holding people hostage like this is totally, absolutely and honestly un-Islamic.”