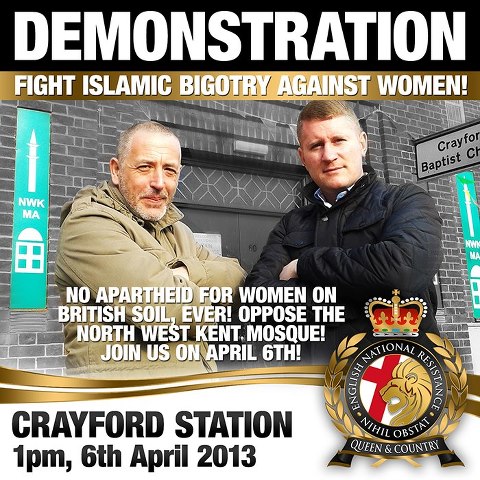 When it comes to the ideology of Islamophobia, fascists invent nothing new – they just take their inspiration from the mainstream media. I doubt most of them had even heard of sharia law or halal slaughter until the right-wing press decided to create moral panics over these issues. In embracing received anti-Muslim prejudice, the one contribution the racist far right does make is to give it an additional thuggish twist.

So, with the likes of the Daily Mail having helped to stir up controversy over so-called “gender segregation” at iERA’s recent public meeting at University College London, it was only a matter of time before far-right racists adopted this as their cause.

It appears that “credit” for being the first fascist group to jump onto this particular Islamophobic bandwagon goes to the English National Resistance. Promoted as a far-right unity initiative, the ENR is essentially a front for the BNP breakaway group Britain First, although it includes the EDL’s former Essex regional organiser Paul Pitt in its leadership, and English Democrats chairman Robin Tilbrook attended its launch meeting in January.

Having expressed their disgust at the events at the iERA debate, as reported by the Mail, the ENR suddenly realised that the North West Kent Muslim Association mosque in Crayford (a former Methodist church) has an entrance for women, marked by a notice outside the building. Yes, it would appear that when Muslims worship at the NWK mosque men and women occupy different sections of the prayer hall. You might have thought that, having spent the last several years obsessively campaigning against Islam, the ENR would be aware of this. But apparently not. They declare themselves shocked – shocked! – that the barbaric practice of gender segregation is allowed on Crayford High Street.

Paul Pitt and Britain First chairman Paul Golding (a former BNP councillor) therefore decided to lead an ENR delegation to confront the mosque leadership. They hung about outside the building until the imam arrived and then proceeded to harass him. Golding boasts that “we managed to collar him and told him to remove the sexist signs because this wasn’t Apartheid South Africa or 1950s segregation America. ‘We don’t allow women to be discriminated against in England’ we told him”.

Unsurprisingly, the imam rejected this demand. Consequently, the ENR have issued the following ultimatum:

“The English National Resistance has given the NWK mosque a deadline of the 17th of April to remove the offending sexist signs, to halt any further segregation of women, and to cover up the Christian Cross on the front of the building. If these conditions are not met by that deadline, the English National Resistance will organise a sustained campaign of protest against the mosque.”

That deadline is obviously flexible, since the ENR also announces that they will be holding a protest against the NWK mosque, under the slogan “Fight Islamic bigotry against women!” on 6 April. The advert for the demonstration (above) features Pitt and Golding standing outside the mosque.

Here we have a classic example of how Islamophobia can develop.  The process begins with Richard Dawkins and other militant atheists promoting a witch-hunt of iERA on the basis of a garbled account of what happened at the UCL debate. This story is then taken up and given mass publicity by the Daily Mail. And the process ends with fascist harassment of Muslims on the streets of Crayford.

Update:  Whoever it was Golding and Pitt harassed outside the mosque, it evidently wasn’t the imam. A News Shopper report quotes imam Hafiz Rahman as saying: “I have no idea about this group – they never came to us about the issue. If they have any problems, the doors are open and I’m available to talk.”

Mr Rahman added that he had not received any complaints from the female members of the mosque’s congregation.

Update 2:  See the letter from Khalida Shah, a woman worshipper at the mosque, in the News Shopper, 11 April 2013