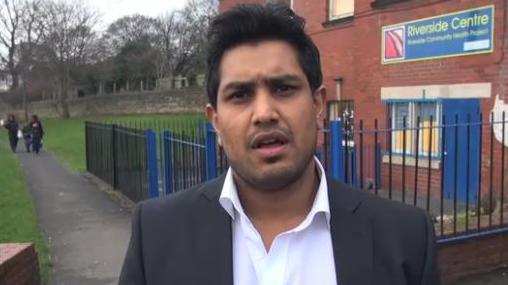 A councillor claims to be the victim of an online attack from far right extremists after he spoke out about the rape of a schoolgirl.

Newcastle City councillor Dipu Ahad called for calm when violence flared in the city’s West as police named 19-year-old Abdul Zalal Miah as the man charged with raping a 15-year-old girl. The same day his Facebook page was inundated with a barrage of malicious comments from members of far right extremist groups condemning his actions.

Coun Ahad, 29, said: “I called for calm on Christmas Eve because tension was mounting and we were worried more incidents would happen. Thankfully we worked hard and the police increased their controls so nothing escalated but I have had a lot of malicious messages personally. Some have become nasty and malicious and say they are going to protest outside my house. These people are using this incident to stir things up.”

Two men were arrested after bricks were thrown at Miah’s family home in Hull Street, Elswick, just hours after he made his first appearance at Newcastle Magistrates’ Court on December 24.

Miah is charged with three counts of rape, possessing an offensive weapon, threats to kill and robbery after the girl was attacked on December 18 on Elswick Road. He appears at Newcastle Crown Court today.

Coun Ahad has now informed Northumbria Police of the messages left on his page by far right activists and have assured him they are monitoring the situation.

He said: “These people who have come on my Facebook are looking to this incident as an opportunity to say I am supporting this Asian guy. We as a community are outraged this crime has happened. This could be our friend or our sister and we totally condemn it and will now see this through the courts.

“I would like to thank everyone in the community over Christmas. People of all backgrounds have pulled together and there was no more trouble.”