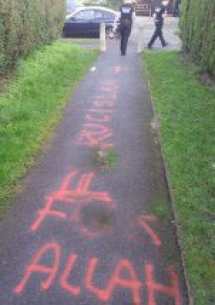 A Muslim family say they have been forced to move from their home after offensive graffiti and a cross wrapped in ham were left outside their house. Murad Alam, 39, said his wife and two sons, aged eight and 10, had moved out of their home in Bingham, Nottinghamshire, to a “safe” place.

Mr Alam said he had found his son plotting escape routes on his computer after the “horrific” attacks last year. “My wife and children also had names called at them in the street,” he said. “The first incident was when the big, wooden cross, wrapped in ham, fell into the house after a knock at the door,” said Mr Alam.

He said they had names such as “Paki” and “tramp” shouted at them in the street. “The kids have been abused a number of times; the eldest had smoke blown in his face by an elderly local gentleman.” Offensive graffiti was also painted on the path outside the family home.

“It really annoys me that they should use a cross and try and turn this into a religious argument,” said Mr Alam. “My family were terrified from the very first incident; my wife had never experienced racism, neither had my kids.

“In fact I had to explain to my children what racism even was, because they’re so young they didn’t understand the concept that someone could dislike you because of your skin colour or religion.”

The family has now moved to West Bridgford where they say they feel safe.

Mr Alam said Bingham was generally a nice area with a good reputation and it was a shame it had been tarred by their experiences.

“The week before we moved there, Bingham was named the eighth best place to live in the UK – but that’s if you’re white – there are not many Asian or black faces there. It is a nice, generally middle-class village and I’m sure most of the people there are great, it’s just these choice few.”

The Daily Mail reports the story under the headline “Terrified Muslim family flee home after burning cross wrapped in ham is left on their doorstep”.

In light of this shocking case, the Mail‘s journalists and editorial staff might perhaps reflect on how the relentless diet of anti-Muslim propaganda that their paper feeds its readers plays out on the ground.