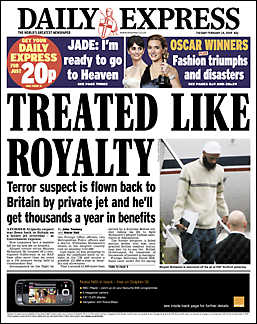 A former Al Qaeda suspect was flown back to Britain on a luxury jet yesterday – at Government expense. Now taxpayers face a massive bill for his new life on benefits.

Alleged torture victim Binyam Mohamed, 30, stepped off a twin-engined Gulfstream at an RAF base after more than six years as a US prisoner being held in Guantanamo Bay. Accompanied on the flight by two Foreign Office officials, two Metropolitan Police officers and a doctor, Ethiopian Mohamed’s return to his adopted country cost an amazing £120,000.

Tory MP David Davies said: “I don’t think it should be a source of pleasure to anyone that this man has returned to the UK. He is an Ethiopian national who was lucky ever to be in Britain in the first place. If he was flown back to Addis Ababa, I think we would all breathe a sigh of relief.”

Fellow Tory MP Philip Davies said: “It’s absolutely ludicrous. This guy isn’t a British citizen, he just happened to be residing in Britain. I cannot see any advantage to the British taxpayer in him coming here. The likelihood is that he will be on benefits and we will be forking out for him while the country is going bankrupt.

“And is he a danger to public safety? Will the Government be putting him under 24-hour monitoring by the security services with the extra strain that on taxpayers’ money? It is an astonishing decision.”

Susie Squire, of the TaxPayers’ Alliance, said: “Binyam Mohamed has already cost the British public quite enough without the luxury of private jets. A cheaper way should have been found to bring him back.

“This man is not even a British citizen, and yet is going to continue to be a massive financial burden on law-abiding taxpayers in this country. We’re in a recession and people need money to feed their kids, not foot the bill for chartering planes and round-the-clock surveillance.”
Daily Express, 24 February 2009

Update:  For comment on this and other similar articles, see ENGAGE, 24 February 2009