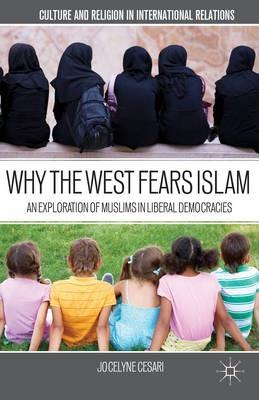 “My book Why the West Fears Islam: Exploration of Islam in Western Liberal Democracies (June 2013 by Palgrave McMillan) indicates a persistent predisposition in the West to link Islam to un-civic behaviour and to see assertive Muslims as internal enemies threatening national values and identities as well as external enemies at war with Western civilisation.

“Intriguingly, there is no empirical evidence based on behaviours of Muslims in European countries or the United States that supports this fear. Actually, Muslim political practices are not different from their average fellow citizens. My investigation shows that in Europe and in the United States, Muslims express a greater trust in national institutions and democracy than their fellow citizens and that mosque attendance actually facilitates social and political integration.”

Jocelyne Cesari, who is Director of the Islam in the West program at Harvard University and a Senior Research Fellow at the Berkley Centre for Religion, Peace and World Affairs at Georgetown University, summarises the findings in her forthcoming study. She concludes that there is a need to “familiarise citizens with this reality through different educational and cultural means” and “rebuild national narratives to include Muslims and Islam as part of the memory and culture of the national communities they belong to”.