The endless refrain of the English Defence League is they can’t be racist, because Islam is not a race. EDL leader Stephen Lennon has even stated that he supports a multicultural Britain, and he recently assured his local paper that if racists are ever found in the ranks of the EDL they are kicked out.

Evidently, not all of the EDL’s leading members are on message. Here is a comment that was posted earlier today on the EDL’s Facebook page. It expresses views on race, national identity and multiculturalism that could easily have appeared on a white supremacist forum like Stormfront: 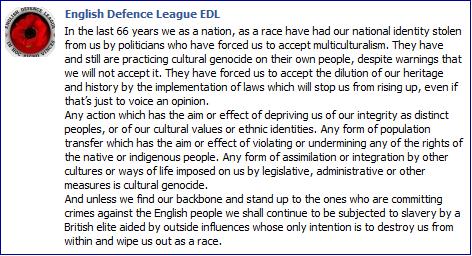 It would be interesting to know who posted this. Perhaps the head of the EDL’s admin team, Hel Gower? We know that Gower is an admirer of the neo-Nazi group the British First Party and that she rejects the line that Islam is not a race, so she certainly shares the sentiments expressed here.

Update:  The comment has been taken down, without any explanation. This raises a number of questions. Who posted the comment? It was obviously someone in a prominent position within the EDL, as they had admin rights to the Facebook page. Stephen Lennon is on record as stating: “I’m not going to say that there aren’t any racists in the EDL but we find out who they are and we kick them out.” Has the racist responsible for this comment, which was posted in the name of the EDL, now been expelled from the organisation, in line with Lennon’s assurance? Don’t expect any answers from the EDL leadership.