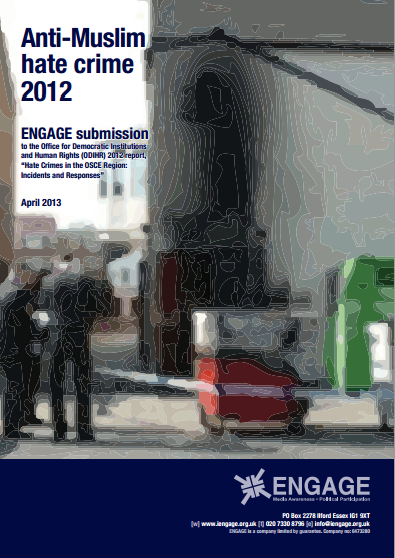 ENGAGE have just published their submission to the Organisation for Security and Co-operation in Europe on anti-Muslim hate crime in the UK, as a contribution to the OSCE’s preparation of its Hate Crime Report 2012.

This is a thoroughly researched document which sheds a disturbing light on the widespread occurrence of anti-Muslim acts in Britain. It is certainly a much more substantial piece of work than anything produced by the government-backed TELL MAMA, despite the large-scale state subsidies the latter receives.

The ENGAGE report should be required reading for anyone who asserts that Islamophobia is a just a myth – or indeed for certain supposed experts on Islamophobia who assisted in the removal of ENGAGE from its position as secretariat to the All-Party Parliamentary Group on Islamophobia, on the entirely spurious grounds that ENGAGE lacked the expertise to carry out that function.