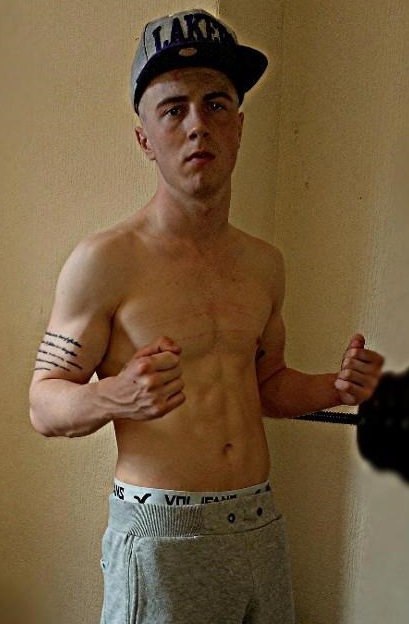 Vile racist thugs drove an Asian family out of their new home as they tried to move in. The Ali family pulled up outside their new house in Elswick, Newcastle, only to be greeted by a seething gang of young yobs.

Boxer Daniel McStay [pictured] and five or six youths started punching and kicking their car, telling them to get off “their estate” and threatening to kill them.

Terrified Mr Ali, who had his wife and three daughters in the car, frantically began reversing to try to get away as the gang kicked his car. One of them threw a pint glass of beer at the back of his car, which smashed showering the car with alcohol and glass.

Fifteen minutes later McStay and two youths subjected another man to a racist attack as he waited in his car for his friend outside Elswick mosque.

As McStay, 22, was jailed for eight months, Mr Ali told how the incident had left him and his family scared to move in. He said: “We had been looking forward to moving in to the new house but now we do not wish to do so. My daughters and wife are extremely upset, we have not been involved in an incident like this before. My family have been racially targeted for no reason. The damage to my car can be repaired, however mentally we have all suffered.”

Newcastle Crown Court heard the family were taking furniture to the house on Brittania Place, Elswick, around 3pm on March 23, ahead of moving in. Just after Mr Ali, his wife and daughters, aged, 10, 18 and 19, pulled up, McStay and the others approached from behind, swigging alcohol.

Neil Pallister, prosecuting, said one of them shouted: “You better not be moving here or we will kill you, this is our estate.” There followed a tirade of vile racist abuse and a 17-year-old started punching the driver’s side window shouting “Get out of here or I will kill you.”

Mr Pallister said: “All of the males were involved in the racial abuse and McStay joined in. Clearly Mr Ali and his family were in great fear and he began reversing his car down the street and turned round to drive away. As he reversed his car the group began kicking his car and ran after him and his family. One of them threw a pint glass which hit the rear window of the car, smashing glass and showering the car with alcohol as they drove away.”

After getting clear of the attack and reporting it to police, the family saw their car had been dented, causing hundreds of pounds of damage. Mr Pallister said: “They were too scared and frightened to move into the address.”

Just fifteen minutes later McStay and two youths targeted an 18-year-old as he waited in his car outside Elswick mosque. He was racially abused and told to leave the area and also had his car kicked.

Mr Pallister said: “The victim was very fearful for his safety and he locked his car door but the males continued to shout racial abuse at him. Fearing for his safety he felt obliged to reverse away out of the location. As he slowly drove away the gang followed him, waving their hands to shoo him away and one of them kicked his vehicle.”

Police caught up with them nearby and eventually Mcstay was also charged over the earlier attack after his trainer print was found on Mr Ali’s car.

Andrew Walker, defending, said: “These incidents were utterly reprehensible, deeply unpleasant and grossly offensive to those to whom it was aimed. It was pathetic in terms of the ignorance of those involved, who should all be utterly ashamed of themselves.” Mr Walker added that McStay, who he said was not the prime mover, takes part in unlicenced boxing bouts.

Two 17-year-olds involved in the incidents were sent to the youth court to be dealt with.

It comes as no surprise to find that McStay is a supporter of the English Defence League. He followed the EDL and “Tommy Robinson” on Twitter (the EDL Twitter feed was run by Hel Gower, who has since followed Robinson out of the EDL, hence the change of name to EnglishDefectLeague). And he attended the May 2013 EDL demonstration in Newcastle, photos of which were posted on his Facebook page (see here and here).