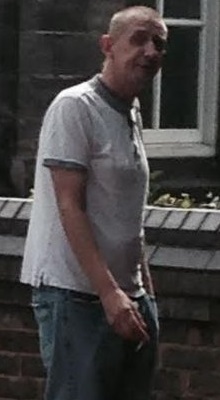 A drunk who drew swastikas and KKK symbols on children’s bunting and hung it outside a proposed mosque in Ellesmere Port, claimed he was influenced by school and TV shows.

Martin Peter Sallis strung up a plastic England flag and garden bunting scrawled with racist slogans and symbols, with messages threatening to “burn down the mosque” with Muslims in it.

The 42-year-old alcoholic said he learned the hateful slogans while he was “at school” and from recent TV shows, before drawing them in red on the bunting which he had spotted hanging in his mum’s garden.

Unemployed Sallis said he carried out the crime because he wanted to “fit in” with the local community who he claimed were against proposals for an Islamic cultural centre in King Street, Ellesmere Port.

Sallis, of Sutton Way, Great Sutton, initially claimed he strung the bunting outside the religious building as a “joke” when he was drunk, but later told police he had wanted to “cause fear, alarm and distress to the Muslim community” following the hate crime between June 27-30 this year.

Chester magistrates today (August 8) imposed a restraining order forcing him to stay away from the proposed religious centre for 12 months. He was also sentenced to a 12 month supervision order, with a drug rehabilitation requirement, a three month curfew, and ordered to pay £145 – £85 of which was court costs.

Jilani Abdul Kardir was working on the construction of the centre – which is currently owned by Cheshire West and Chester Council and will hold Friday prayers and religious festivals if it gets planning permission in September – when he found the bunting and England flag hanging from scaffolding outside.

One piece of bunting had slogans written in red including “Abu Hamza burn in hell”, “burn in hell forever”, said Anouska Youd, prosecuting. “There was also a swastika drawn on it with an SS added,” she said. The bunting also had “burn mosque down with youse in it” a “KKK” and the initials “APINF” written on it, she added.

When police searched his mother’s home in Ellesmere Port they found more of the “children’s bunting”, which Sallis spotted in her garden and decided to write the messages on as “bit of a laugh” when he was drunk.

During police interviews, Sallis who has 15 previous convictions, admitted he learned the comments from “school exercises” and “recent TV shows” and had done it to “fit in”.

“He does not consider himself to have any deep rooted racial views,” said Stephen Ferns defending. “It was two pieces of bunting, nothing of any great size, not something that would have been visible. He was intoxicated at the time and thought it would be a bit of a joke if he wrote these messages on it and hung it up. He is shocked by how bad what he had written had been.”

Sallis, who is an alcoholic and has suffered from drug addiction in the past, pleaded guilty to racially or religiously aggravated harassment.