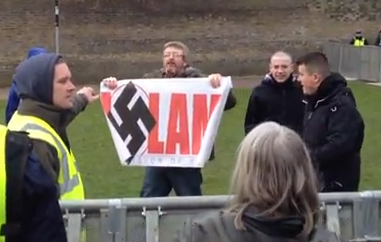 The English Defence League has vowed to return to Cambridge in bigger numbers – despite a low turnout and several arrests.

Its rally on Christ’s Pieces on Saturday ended early after only about 40 members turned up. More than 400 officers were drafted in to police them and a counter-demonstration by Cambridge Unite Against Fascism which had more than 500 people in its ranks, according to police.

EDL members said they were furious, claiming they were “penned in” during attempts to protest against a planned mosque in Mill Road. Scores of police surrounded the EDL protesters who were behind fences next to Drummer Street bus station.

EDL members were heckled by passers-by and began to fight among themselves as their stewards tried to eject a man who had a “banned” Nazi banner. When counter-protesters marched past, with the two groups separated by a police “no-go zone”, one EDL member broke through but was quickly stopped by police.

A spokesman for the group’s East Anglia Division told the News: “We are not thugs or extremists. We are the silent majority but we have been penned in like pigs while the police allow the lefties to march through the city.

“But we will be back in bigger numbers. The leaders are planning a national protest here in Cambridge. All we want to do is have a peaceful protest against a mosque that is not in keeping and will cause no end of traffic problems as it holds 1,000 but has just 80 parking spaces. We are not against Muslims. We are anti-Islam.”

Tourist Vic Synott, 50, of Ayr, Scotland, came across the EDL chanting “we are the famous EDL”. He said: “They are just showing themselves up by their behaviour. They are a disgrace.”

EDL speakers hit out at MEP Richard Howitt for branding them “extremists”.

The Euro MP told the counter-marchers the party had sent him a note “adorned with Nazi swastikas” and accusing him of being “a traitor to civilisation and democracy”. He added: “There is only one group that represents everything in our society which is uncivilised and undemocratic. The traitors to Britain’s traditions of tolerance, fairness and respect – the true traitors – are the EDL themselves. They are a joke.”

As you can see from the YouTube link, the so-called Nazi banner featured the word “ISLAM” with the letter “S” replaced by a swastika. The individual holding it shouted that “Islam is fascism – anti-democratic, misogynistic, anti-gay”, while his drunken supporters chanted “stick your fucking Islam up your arse”. However other EDL members, who were presumably too thick to understand the message behind the banner, attacked him on the basis that he had broken the EDL’s ban on the public display of Nazi symbols.

Update 2:  Cambridge News reports that the EDL dispute the statement by Richard Howitt MEP that there is no local support for the EDL and are claiming that most of their supporters at the rally came from Cambridge itself. EDL News exposes this claim for the nonsense that it is.