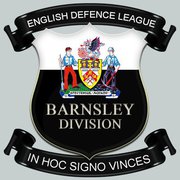 An English Defence League supporter who chanted “Muslim bombers off our streets” has been jailed for eight months.

Daniel Parker, 39, was with a group who, according to a judge aimed “vile and disgusting” abuse at a religious leader. The group had been on an EDL march in April when they began throwing stones outside Barnsley Muslim Community Centre. The imam came out to find EDL supporters shouting abuse including “Why don’t you go back to your country?”

Prosecutor Louise Gallagher told Sheffield Crown Court that the imam heard a loud bang on the window as he was about to lead prayers and then went outdoors, where he “found the language abusive and racist”.

When arrested, Parker, of Prince Arthur Street, Barnsley, told police he was shouting “because he was drunk and an idiot”. He admitted an unusual offence of religiously aggravated harassment. His barrister Tina Dempster said he was the only one of the group arrested and, if he had not admitted chanting, would probably not have been charged.

Judge Roger Keen said Parker was of previous good character. But he added: “You and others ought to understand that that sort of behaviour will not be tolerated and people like you will go to prison.”

To quote from the Facebook page of Yorkshire EDL Barnsley Division: “Our arguement is not against normal muslim people but extremists preaching hate on our streets/harbouring terrorists and encouraging the formation of an islamic state within our shores. Despite constant bad press claiming we are racist this is completely inaccurate….”