A protester photographed holding a stick near Kingston Mosque has claimed he was in “the wrong place at the wrong time”.

Henry Hunter handed himself in to police after being pictured on the front page of the Surrey Comet, following an appeal to find more suspects in the attack on the East Road mosque on November 21, 2010.

At Kingston Crown Court, Mr Hunter denied being part of the group who threw sticks, beer bottles and bacon at the Muslim place of worship, and said he felt scared at what he saw.

He said he was part of the protest march against Muslim extremism that had taken place earlier that day, which concluded peacefully.

But a mob of men targetted the mosque after the march. Mr Hunter admitted going with the group to East Road, but said he broke away when they started throwing objects.

Giving evidence on Friday, Mr Hunter, 19, of Ashford in Middlesex, told prosecutor Anthony Montgomery: “I was in the wrong place at the wrong time. Everybody started moving down towards the mosque. I may have moved down the road but not far at all.”

The jury was shown a picture of Mr Hunter in East Road holding a stick, and standing next to Alfie Wallace. Wallace, as well as David Morris and Martin Pottle, was convicted of the mosque attack in April this year.

It was after that trial that this newspaper printed a picture of Mr Hunter on the front page, asking for help to find him. The same day the paper was published, April 9, Mr Hunter handed himself in to police.

Mr Hunter said: “I was at home and my mum phoned me. She was in tears saying my picture was on the front page of the paper. I said I would hand myself in.”

Mr Hunter said he was given the stick by another member of the group, and was unaware a photo was being taken. He said: “They all got a bit rowdy and shouting. To be honest, it scared me. I wanted nothing to do with it. I knew it was wrong.”

Asked if he threw the stick at the mosque, Mr Hunter said: “I didn’t. I knew it was wrong. I threw it away and started to leave.”

CCTV stills showed Mr Hunter fleeing the road along with a group of men. Asked why he was running with the group, Mr Hunter said: “I’m not sure really. Everybody else was running so I ran.”

Mr Hunter denies one charge of violent disorder and another of racially and religiously aggravated criminal damage. The jury of eight women and four men retired to consider its verdict earlier today. 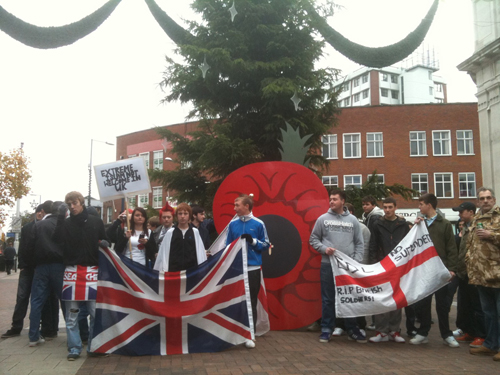