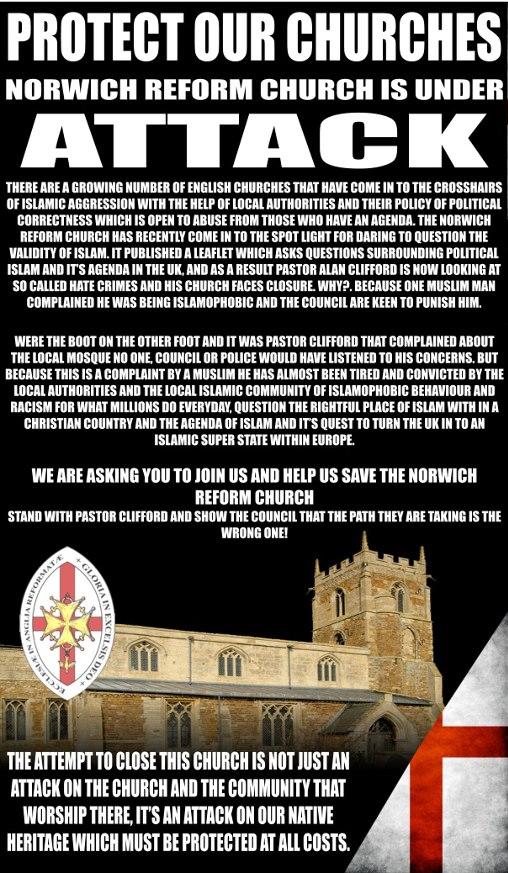 The English Defence League will hold its first march in Norwich this November, citing a decision to ban a Christian bookstall as a reason for the demonstration. Police confirmed they had been approached by the EDL about the protest for Saturday November 10, although a route is yet to be decided.

The EDL, which has 81 members on its Norwich Facebook page, listed the banning of Reverend Alan Clifford of the Norwich Reformed Church from using a market stall on Hay Hill as a reason for the march. They believe the decision by Norwich City Council, following a complaint about anti-Islamic leaflets, violated freedom of speech.

On its website the EDL says it protests “peacefully”, but some marches have been marred by violence.

A campaign group called We are Norwich said it will hold a counter-protest to celebrate the city’s diversity. Nick O’Brien from the group said: “The EDL do not represent the diverse, multi-cultural city.”

A police spokeswoman said: “We understand there may be concerns and feelings of vulnerability within a number of communities and we will be looking to work closely with the organisers, our partners and community leaders to help address these.”

Green Party councillor Lucy Galvin added: “Communities in Norwich have a long tradition of religious acceptance and living together respectfully.”

This demonstration has been a long time in coming. A protest in support of Alan Clifford and his church was first proposed by the EDL back in May and it was originally set for 20 October. However, in a desperate attempt to counter the demoralisation that has set in following their disastrous visit to East London earlier this month, a recent meeting of the EDL took a decision to return to Walthamstow for a repeat demonstration on 27 October. Consequently the Norwich demonstration had to be rescheduled.

In their advert for the demonstration the EDL’s East Anglian Division asserts that Clifford’s church has been victimised by a politically correct council for “daring to question the validity of Islam” and distributing “a leaflet which asks questions about political Islam and it agenda in the UK”. As we have previously pointed out, Clifford’s publication “Why Not Islam” is in fact a hate-filled screed that accuses govenments of “ignorantly distinguishing between militant and moderate Islam”, denounces “Islam’s appeal to the baser instincts of human nature”, and warns that “seemingly-benign Muslim communities will always be breeding grounds from which their more militant members can recruit jihadists”. Norwich council was entirely justified in banning such literature from local authority premises.

The decision to stage the Norwich demonstration on 10 November has had the happy side-effect of further dividing the Islamophobic far right, since this is the same date that the ex-EDL splinter group the Infidels had already set for their planned protest against the so-called mega-mosque in Newham. Not surprisingly the Infidels have vigorously expressed their dissatisfaction with this situation. Looks like Stephen Lennon’s appeal to his far-right critics to put aside their differences with the EDL leadership and unite around the forthcoming Walthamstow demonstration isn’t going down too well.