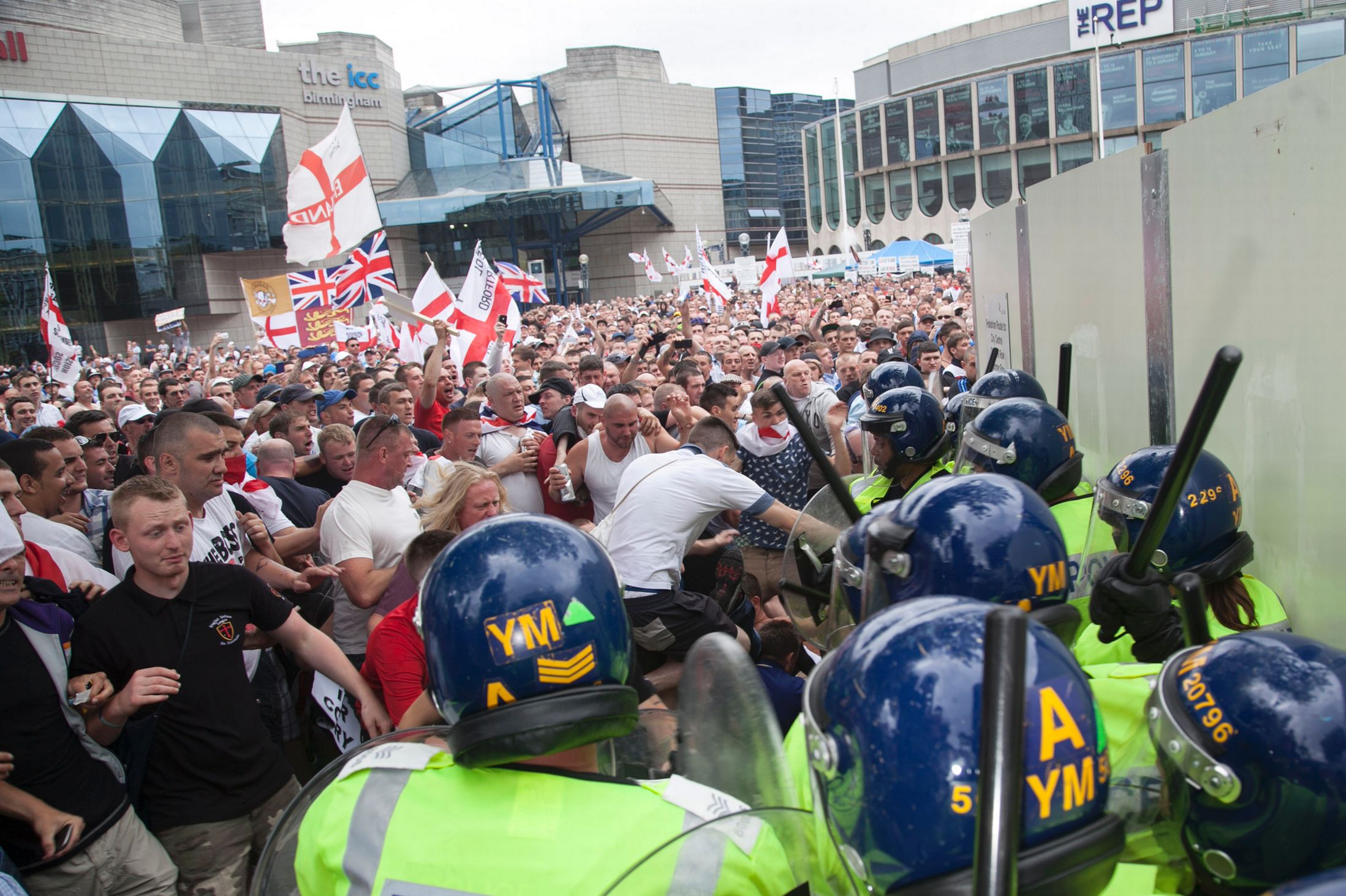 It was a day drenched in blood which saw Broad Street and Centenary Square ring-fenced by legions of riot police.

Windows were smashed, cobbles torn up and fences around the unfinished Library Of Birmingham were demolished. Now 16 men have pleaded guilty to committing violent disorder at the height of a 2,000-strong English Defence League rally last July.

All of the men, from the West Midlands and other parts of the country, appeared at Birmingham Crown Court. Each faced a charge of violent disorder stemming from the July 20 demonstration, in which it was said they had threatened unlawful violence. The charge stated they had acted in a group where their conduct would make others fear for their safety.

All 16 spoke only to confirm their names and to enter their guilty pleas. His Honour Judge Murray Creed adjourned their cases for sentencing to a later date.

The demonstration against radical Islam brought fear to the city streets, as coaches ferried about 2,000 EDL supporters [sic – in reality far fewer than that] to Broad Street. A 300-strong counter demonstration by Unite Against Fascism and other rival groups was held in nearby Chamberlain Square.

In total 47 people have since been charged by West Midlands Police for offences relating to the protests. Some were arrested following high-profile appeals on the BBC Crimewatch programme in January.

At the time Detective Chief Inspector Simon Wallis, from the Force Criminal Investigation Department, said: “We want to make it clear that regardless of how many months have passed we are still continuing to identify and arrest people involved in violent scenes at last summer’s protests. Anyone who brings violence to our streets will be pursued by police, particularly if they cause significant harm to others or damage to property.”

On the day of the disorder, EDL supporters arrived in the city and gathered at Broad Street’s Bar Risa. Fuelled by drink, they marched to Centenary Square where then leader Tommy Robinson delivered a speech in the shadow of the ICC and Symphony Hall.

It was during the speeches that violence flared between EDL supporters and cops clad in full riot gear. At one point a portable toilet, set up for the protesters, was tipped over while fences around the new library were torn down. As flash points moved from one side of the square to the other, missiles were thrown at cops including bottles, and cobble stones.

It was estimated around £6,000 of damage was caused to a sign at the entrance to the Hyatt Hotel, as demonstrators again clashed with police. One policeman suffered concussion during scuffles while other demonstrators were left bloodied by missiles amid clashes with the police.

DCI Wallis added in an earlier appeal: “In one incident alone £150,000 worth of damage was caused to an office block in the city centre and violent protesters used items from the nearby construction site of the new Birmingham Library as missiles or weapons to cause damage.”

Those who pleaded guilty at court on Wednesday were: