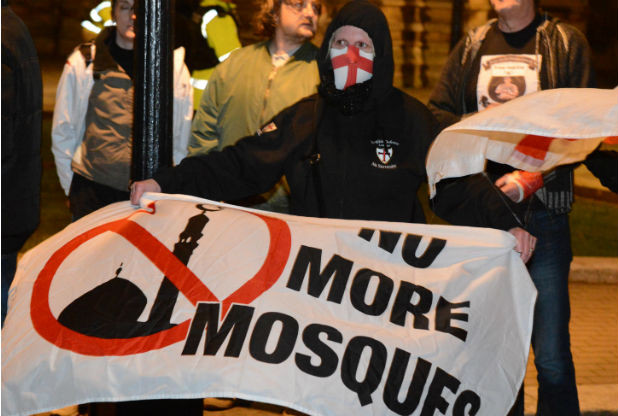 Central Bristol witnessed ugly scenes this evening as right wing protesters opposed to plans to open a mosque in Stokes Croft were confronted by counter-demonstrators.

About 30 supporters of the English Defence League turned out on College Green to stage what had been advertised as a “peaceful” protest against the former Jesters comedy club in Cheltenham Road being turned into a mosque. Bristol Unite Against Fascism held a counter-demonstration, attended by about 80 people, which led to a 40-minute stand-off near the entrance to Bristol Cathedral.

The two groups shouted slogans and abuse at each other, separated by a cordon of about 24 police officers in high-visibility jackets. At one stage there was a minor scuffle but a police inspector later said he knew of no arrests. The anti-Fascists shouted: “Nazi scum! Off our streets!” The right wingers responded: “UAF! Off our streets!”

EDL members began to disperse after about half-an-hour. They had gathered at a pub near the Arnolfini arts centre before being escorted to City Hall for the protest.

The EDL had discovered that members of the Assahaba Centre, which is behind the mosque plan, had been invited by the Safer Bristol Partnership to discuss their proposals with objectors at City Hall. The aim was to discuss the objectors’ concerns and provide a better insight into the Islamic faith. But the meeting was cancelled after the EDL protest became known.

Martin Upchurch, convenor of Bristol Unite Against Fascism, said the purpose of their demo was to defend Bristol as a multi-cultural city. He said any religious group had the right to worship and hold cultural events. Hibaq Jama, Bristol’s first Somali councillor and a Muslim, said: “The EDL has no place in Bristol. They want to give the impression that Bristol has a problem with Islam but there isn’t one. I think it’s very unfortunate that people have seen this on their way home tonight.”

Farooq Siddique, who writes a Bristol Post column, ‘A Muslim in Bristol’, today shared a message he had received from police community liaison officer Keith Openshaw on his Facebook page. Mr Openshaw said in his message that if the meeting was cancelled it “would not be as a result of any EDL pressure but from a desire not to waste the time of those willing to work towards promoting a greater understanding and tolerance”.

The former Jesters club has been standing empty for nearly two years after the club’s owner, David Trew, said the business had become too expensive to operate. Objectors to planning permission being granted were worried that a mosque could become a target for attacks by minority groups. They were also concerned about the appearance of proposed extensions.

The plans were approved by council officers under delegated powers, the Post reported yesterday.