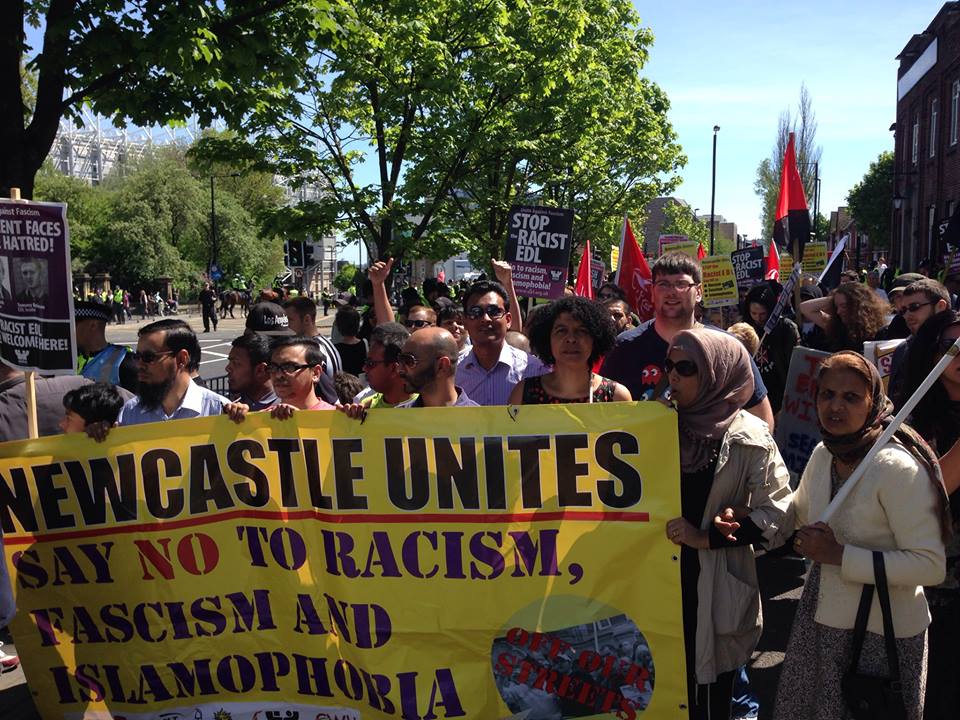 Up to 400 English Defence League supporters joined forces yesterday to march through Newcastle.

The event started at 1pm in the Bigg Market, snaked along Collingwood Street, on to Westgate Road, along St James’ Boulevard, on to Barrack Road and into Leazes Park. The procession was led to the beating of a drum and chants by its members. Supporters draped in Union Jacks and St George’s flags where hemmed in by lines of police.

The far-right group landed at Leazes Park to the sounds of a DJ in the sweltering heat. And from the bandstand they listened to a string of speakers.

Police wearing high visibility jackets flanked the crowds and in the park they carried riot helmets in case of any trouble.

Joining in with the march were people of all ages, from pensioners to mums with their toddler children.

Wendy Angel, from Newcastle, who has been an EDL member since 2011, was an event speaker. She said: “There are more than 300 people here today. It’s great to get this support.”

Ian Crossland, from Sheffield, who is EDL’s South Yorkshire regional organiser, said: “We have had fantastic support. This is just a regional demo and over 300 have turned up. Last week we had a national demo in Rotherham and 700 attended there. We want to get our message across to the general public.”

Hundreds of police lined the streets were the march took place. Across the city officers could also be seen.

Anti-fascist group Newcastle Unites made a counter protest as they marched through the centre. The two groups were kept apart as Newcastle Unites started their march at the City Hall before going along John Dobson Street, on to New Bridge Street, along Blackett Street and ended up at the Monument where they held speeches.

Once the EDL were in Leazes Park, Newcastle Unites members marched along Gallowgate to Barrack Road where they held a static protest. The EDL then marched back to the Bigg Market where the event finished.

Leader of Newcastle City Council, Coun Nick Forbes, said: “The extremist views of groups like the English Defence League have no place in a modern, welcoming city like Newcastle where everyone regardless of colour, creed or ethnicity is treated with respect. Their presence here is a huge concern to businesses and communities alike.”

Here is a report from a participant in the Newcastle Unites counter-protest: 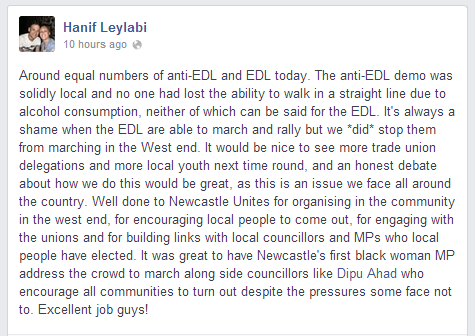 And here is some footage from Ruptly TV, which provides some balance to the Chronicle‘s bland description of the EDL demonstration as consisting of “people of all ages, from pensioners to mums with their toddler children”: